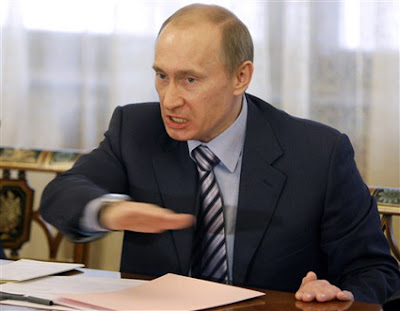 The tough statement appears to herald a new round in spiraling Russia-West confrontation over Ukraine.

It followed a session of Russia's Security Council chaired by President Vladimir Putin, who vowed to firmly resist Western pressure and ordered to draft a new response.

Russia may, for example, revise favorable conditions for Finnish timber traders in response to Helsinki's refusal to issue a visa to the Russian lower house speaker, the council's secretary, Nikolai Patrushev said.

He added in televised remarks that Russia wouldn't necessarily make the move, but wants to consider this and other retaliatory measures.

Finland has denied entry to the State Duma speaker, Sergei Naryshkin, because he was on the EU sanctions list.

Naryshkin planned to lead a delegation to next week's session of the Parliamentary Assembly of the Organization for Security and Cooperation in Europe, and Moscow responded to the Finnish move by boycotting the meeting.

Travel restrictions against Russian officials and businessmen are part of the U.S. and the EU response to Moscow's 2014 annexation of Ukraine's Crimean Peninsula and its support for pro-Russian insurgents in eastern Ukraine.

The West also has slapped Russia with economic sanctions, which have cut its access to capital markets and banned transfers of military and energy technologies.

Moscow has retaliated to Western sanctions by banning many Western agricultural products.

Speaking at the Security Council's meeting, Putin said the West wants to punish Russia for its course.

"We are conducting independent domestic and foreign policy. We aren't trading in our sovereignty and some don't like it," he said.

Putin pointed at the EU's decision last month to extend its sanctions through January and the U.S. warnings of possible new penalties as signals that "we shouldn't expect some of our geopolitical opponents to revise their unfriendly course in the foreseeable future."

He said that Russia should respond with "additional systemic measures in all key areas," but refrained from specifics in his opening remarks.

Putin didn't mention any specific countries, but Patrushev, his long-time lieutenant and a fellow KGB veteran, squarely blamed Washington for the Ukrainian crisis.

"The United States has initiated all those events in Ukraine. It has initiated a coup and put the current Ukrainian leadership in power," he said in a reference to the massive public protests that chased Ukraine's former pro-Moscow president from office.

Patrushev claimed that the settlement of the Ukrainian conflict depends entirely on the U.S.

"If the U.S. takes steps to normalize the situation, it will be normalized. If it doesn't want to do so, the situation will drag on for a long time," he said.

The U.S. and the EU, in turn, have accused Moscow of fueling a rebellion in eastern Ukraine with troops and weapons — accusations Moscow has denied.

They said the sanctions should stay in place until Russia fulfills the terms of February's cease-fire deal.