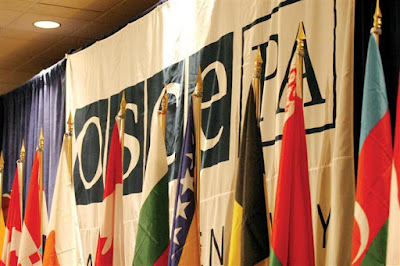 Parliamentarians voted by a margin of 96 in favor to 7 against with 32 abstentions on the resolution on July 8.

The text calls on Russia to “stop the supply and flow" of heavy weaponry, ammunition, Russian army units, and mercenaries across the Russian border into eastern Ukraine, and cease providing any military, financial, or logistical aid to pro-Russian separatists.

It expresses the Parliamentary Assembly’s deep concern that the situation in Crimea, which Russia annexed in March 2014, "continues to deteriorate, leading to serious violations of human rights and fundamental freedoms.”

Russia is boycotting the OSCE Parliamentary Assembly’s annual session in Helsinki after Finland said it would block Russian State Duma speaker Sergei Naryshkin and five other Russian delegates from attending.