July 29, 2015
LONDON, England -- Ukraine conflict remains an undeclared war, but the language in universal use use of "invasion," "occupation" and "the aggressor" leaves no doubt that this is a country under attack. 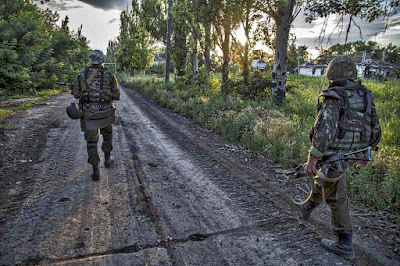 Ukrainian soldiers walk through the ruins of the village of Opytne, only a few miles from Donetsk international airport.

Travelling to the Dnipropetrovsk 'oblast' or region adjacent to the fighting, refugees from the conflict and humanitarian workers who'd helped them, gave a chilling account to us of the chaotic conditions in the Donetsk and Luhansk regions captured by Russian-inspired rebels.

"People feel abandoned. There is rubbish everywhere, stray animals, the place is a mess. There is no law at all," said one refugee, Svetlana.

"900,000 people have been left helpless in their homes. All the doctors have left. When the international community gets full access to the territories, we will open the doors and start carrying out bodies of people long-since dead," Andriy Vaskovych from aid agency Caritas told us.

UN officials described a "Rambo generation" of children being created, up to 80% of whom had directly witnessed violence.

Babies born in the occupied territories are unable to be issued with birth certificates, effectively making them stateless.

Citing an incident where seven engineers who'd gone to repair a water pumping station were killed, humanitarian workers and local journalists both described deliberate attempts to block access to water, food and medicines as effectively a 'blockade' and 'punishment'.

The separatists have turned away many humanitarian deliveries to the territories, instead paying rudimentary pensions directly in Russian roubles - having the perverse consequence of making elderly people the meagre breadwinners to support everyone else.

This week too, the Russian rouble is due to be adopted as the official currency of the disputed territories.

Dnipropetrovsk was the home of Leonid Brezhnev.

Ironically it is a city which was itself 'closed' to all outsiders in the Soviet era, as a centre of military research and rocket technology.

Today it is the open focus for more than a million people who have fled their homes during the conflict.

Analysts in London and Brussels have started to write that the 'Minsk 2' ceasefire negotiated in February is holding, a new frozen conflict having evolved in Ukraine, to match others in the Caucusus region.

Local opinion described such analysis as optimistic, and the "best outcome" in what remains a highly unpredictable situation, albeit one which is still wholly unacceptable to the Ukrainian state.

European security monitors told us that despite tentative agreements for the withdrawal of heavy arms, there is no reduction of forces from the region.

One of their own unarmed drones filming the evidence was shot down as we spoke.

Breaches of the ceasefire have increased rather than reduced, they tell us.

Olexander Turchynov, head of the country's National Security Council back in Kiev, claimed to us that the previous night alone had seen 86 violations, ten wounded and one killed in action.

If Russia was planning a full-scale military invasion to annex the East of Ukraine, as they did to Crimea last year, wouldn't it have occurred by now, I ask?

"Not a single town or village would give up easily. If it was not for those heavy losses, nothing would stop Putin mounting a full scale war on Ukraine's territory," according to Turchynov.

Others suggested Russia's aims were satisfied having certainly prevented an early steps for Ukraine to join NATO, and using a combination of propaganda and local destabilisation now to keep the country weak and divided.

Foreign Minister Pavlo Klimkin suggested to us that this was a fight which might extend to two decades.

This could be a fight for the long-haul.

But shorter-term worries arise in Crimea's ethnic Tatars telling us local Mafia are using the territory to smuggle goods in breach of EU sanctions.

Ukraine's President Petro Poroshenko also reminded us that the first Minsk ceasefire had failed over what he called a 'fake election,' and warned that similar manipulation at local elections in Ukraine as soon as this October risk collapse of the current deal.

A further potential provocation could come from right-wing groups in the country, one of the targets of Russian propaganda, but which an international journalist described to me as believed to be 'Moscow's men.'

A tactical decision to gain sea access for the rebel territories via the city of Mariupol is yet one more danger.

"That's the most likely flashpoint. Separatists were driven out from there not by Kiev but by local people. They are Russian speakers. If there is an attack, it will be a massacre," the same journalist added.

One final spark which could re-ignite a 'hot war' could perhaps come in the stories circulating that Ukraine is starting to allow troops on to its own borders from neighbouring Moldova, to cut-off Russian access to the frozen enclave in their own country.

I can't believe Vladimir Putin will stand idly by, if these stories are confirmed.

The chances of political agreement between Ukraine, Russia and the rebel territories look distant.

Despite setting up parallel structures of authority, the rebels are labelled 'terrorists' by Kiev.

International representatives concede they are 'puppets',' 'yanked' back to Moscow as soon as they are out of line, and would refuse any deal knowing it would mean not just the loss of power but of their liberty too.

We are briefed on what is called the 'Normandy format' telephone call which took place between the leaders of Ukraine, Russia, France and Germany during our visit.

Despite a promise only to continue talks on the key issue of the status of the two disputed regions, there is a positive sign in President Poroshenko telling us:

"This is the first time there have been constructive results from the talks."

Ukraine itself freely admits it has its own deep shortcomings, as it seeks to escape the corruption, bureaucracy and judicial failures which are the legacy of its own chapter in Soviet history.

The stamp required in the passport for internally displaced persons to register for assistance is likened to 'propiska' of the Soviet era.

Meanwhile corruption allegations within the office of the country's highest prosecutor in which a bag of diamonds was discovered, have been incredulously explained as "stones for the fish tank he has at home."

Prime Minister Arseniy Arsenyuk is impressively candid about the challenges for his government when we meet him.

He says he is in discussion with the Council of Europe about wholesale "reshuffling" of the country's 9,000-strong judiciary and implores EU countries to send our own detectives to bring rigour to the country's anti-corruption agency.

Even delivering the constitutional 'special status' to the two rebel regions which is an explicit part of the Minsk agreement presents him with problems.

The European parliamentarians added our own efforts to help bridge the fissures in the Government coalition, which left Arsenyuk thirteen votes short of the necessary majority at first reading, before the final vote in the country's parliament due next September.

Nevertheless, we were left in little doubt that Ukraine's European perspective remains undimmed, which was the deepest aspiration of the protesters in Kiev's Maidan Square, and for which for many lost their lives.

"The only way for Ukraine is to 'Go West'," was the robust conclusion of the European Union's chief diplomat in the country.

Ukraine's 'association agreement' with the European Union is absolutely driving the agenda.

Indeed the country's leading politicians are all determined to avoid any Russian veto which might further delay implementation of the trade dimension to the deal from January next year.

It is ironic that it is the European side which has a cloud on the horizon, as Greece is one of just three countries which has failed to deliver the necessary unanimous ratification of the agreement, a country which has enjoyed a flirtation with Moscow in its own current plight.

There is a grim coincidence that the two places in Europe where the banking system has currently failed to operate are in Greece and in the conflict zone of eastern Ukraine.

This week's talks did suggest good progress towards achieving the much-cherished aim for agreement of visa-free travel for Ukrainians to mainland Europe's 'Schengen zone', which may be achieved by the end of the year.

But Ukrainian demands for arms sales and for the launching of a European Union "CSDP" defence mission to oversee the Minsk agreement are likely to meet a more divided response from within the European Union, as well as likely hostility from Moscow.

Nevertheless, while we were in the country too, the announcement of the formation of a joint battalion between Poland, Lithuania and Ukraine, and the conduct of 'Trident' joint military exercises in the country by NATO, both showed that military cooperation is very much a component in Europe's response.

"Some EU member states are resisting large scale military support but let me be clear: we are protecting your borders," President Poroshenko told the European Parliamentarians.

The Socialist European group is committed both to sign up to the sanctions against Russia but also to keeping lines of communication open towards Moscow in favour of a negotiated solution if at all possible.

However, the last week has left me in no doubt that this is quite literally a fight for Europe within Ukraine.

Europe has to consider very carefully the consequences for all of us whether it is a fight we can afford to be lost and to decide for ourselves exactly what constitutes victory or defeat?

Cold war, hot war or no war at all.