July 10, 2015
HELSINKI, Finland -- Some 100 lawmakers, mainly from Europe, have condemned Russia's actions in Crimea and Ukraine at a meeting honouring a 1975 accord seen as a milestone in reducing tensions between the East and West during the Cold War. 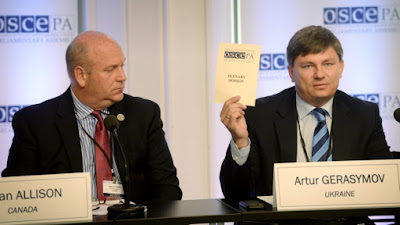 Seven opposed the motion and 32 abstained.

Russia was absent from 40th anniversary meeting in the Finnish capital as its delegates were denied visas in line with the European Union's travel bans for Russia's actions in the Ukraine crisis.

The Helsinki Final Act, signed in 1975 by 35 nations, facilitated encounters between several Cold War leaders, including U.S. and Soviet presidents and a meeting between the heads of a divided Germany.