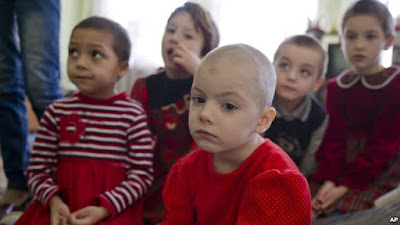 Lyuba, center, wearing a red outfit, sits along with other girls in a children's home in Khartsyzk, Ukraine.

This, it says, is forcing many families to travel to neighboring villages to get water from functioning wells.

UNICEF’s Regional Chief of Emergency for Central and Eastern Europe and CIS, Robert McCarthy, just returned from a 10-day mission in eastern Ukraine.

One of his stops was in the port-city of Mariupol, which currently is under government control.

“The city is no longer receiving water from a fairly extensive water channel that starts at the town of Severskiy and this channel has been damaged by shell-fire and the city is therefore now reliant on a water storage reservoir that is on the verge of being depleted in terms of the water in the system,” he said.

McCarthy says it is blisteringly hot in Mariupol, heightening the risk of water-borne disease.

He says urgent measures must be taken to improve the flow of water and the safe delivery of water to the population.

McCarthy says it is difficult to move across the line of control between government and non-government areas to deliver water, medicine and other essential relief supplies.

He would not respond directly when VOA asked him if rebel forces were actively preventing the delivery of aid to Mariupol.

“I would not comment on that, but just highlight that as I said, we have only had one primary corridor in recent weeks that we have been able to use to cross," he said.

"But, I think that the fact that we only have one out of perhaps over 12 different crossing points that have been used indicates that we do not have good conditions for the necessary movement.”

UNICEF reports almost 1.4 million people, including at least 174,000 children have been internally displaced since fighting erupted in eastern Ukraine in April 2014.

It says the humanitarian crisis in the country is affecting more than five million people, including 1.7 million children, who are among the most vulnerable.