Crucial Weapons In The Defense Of Ukraine

July 23, 2015
KIEV, Ukraine -- Russia’s aggression against Ukraine is an assault on the vision that emerged from the end of the Cold War of a Europe whole, free and at peace. 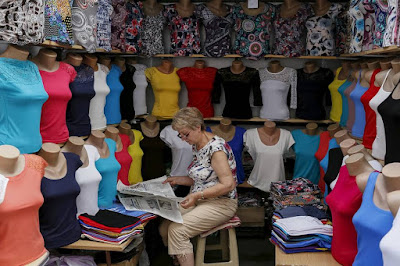 A street vendor waits for customers in central Kiev.

For that vision to be realized, the war against Ukraine must end, and its government must be able to offer its people a secure, prosperous and democratic future.

If Ukraine—a country of more than 40 million people—becomes a failed state, the turmoil will spill into the European Union and likely fuel future conflict between Russia and the trans-Atlantic community.

Since Russia invaded and “annexed” Crimea in March 2014, the war has destroyed an estimated 20% of Ukraine’s economic potential and displaced about one million people.

If Ukraine’s economy collapses—and if its democracy descends into recriminations and clashing factions—there can be no successful defense of its territory and independence.

The International Monetary Fund forecasts that Ukraine’s economy will shrink by 9% this year after a drop of about 7% in 2014, and that inflation will reach almost 50%.

But the IMF has also been impressed by the Ukrainian government’s efforts to reform an opaque system that for too long fueled corruption not growth.

This required great courage at a time when ordinary Ukrainians are suffering from rising prices and plummeting living standards.

Pensions were cut and taxes increased.

The budget process was transformed so spending discipline can be enforced.

The IMF recognized these efforts with a $17.5 billion loan package this year.

But the fund estimates that Ukraine will need about $40 billion over four years.

Russia doesn’t have to conquer Ukraine; it can bleed its economy until the society and government collapse.

The U.S., EU and World Bank have each committed about $2 billion.

Other donors are assisting.

But this is a pittance compared with Greece.

All should stretch to do more.

If the Ukrainian patriots fail for lack of support, Europeans and Americans will pay the price for years through costs of insecurity, criminal networks and social breakdown.

The IMF also expects Ukraine to restructure its debt to achieve about $15 billion of savings.

This is critical: Of the $3 billion of IMF support that the Ukrainian government has received this year, $2.4 billion has been used to service debt.

It will be hard to increase support if the emergency money flows out the door to creditors.

No creditor wants to yield to a debt restructuring.

Yet the bondholders’ commercial interest argues for a serious adjustment that enables Ukraine’s reforms to succeed so that the creditors can eventually get paid.

Put simply, the IMF numbers—and the reformers’ budgets—do not add up without debt reduction.

About $3 billion of Ukraine’s euro bonds are held by Russia, and we are not aware of any principle that a debtor must repay a country that invades it.

The IMF has stated it will continue to support Ukraine, in accordance with the fund’s lending-into-arrears policy, even if Kiev halts payments to creditors.

The Ukrainian government has suggested that it is willing to offer creditors increased returns in the future if the recovery succeeds beyond the expectations of the IMF program—analogous to GDP warrants.

Yet the Ukrainian Parliament has also authorized the government’s negotiators to default if the creditors fail to agree to a package that gives Ukrainian democracy a chance to survive.

Ukraine is not Argentina.

Nor is it Greece.

The country has been invaded.

A young democracy threatened by war is taking reform steps reminiscent of the courageous Poles 25 years ago.

The Poles changed European history; Ukrainians can, too.

The odds may be long, but the prize is great, and the trans-Atlantic community will never have a better chance to invest in Ukraine’s success.

If Western governments do not stretch to assist—and creditors persist with short-term calculations—the likelihood is high that Ukraine will fall back to the post-Soviet world of authoritarian government and gangster capitalism.

An open and prosperous Ukraine will allow opportunity and commerce to flourish, not just within its own borders, but also within the wider region.

The vital interests of Ukrainians, other Europeans, Americans and global investors are one and the same.

Now is the moment for the U.S. to lead in pressing all the parties to recognize that truth.