A Russian Military Base Has Been Spotted In Eastern Ukraine

July 01, 2015
KIEV, Ukraine -- Dnipro-1, one of Ukraine’s many pro-government volunteer regiments, today released a video compiling drone footage of a Russian military camp just south of the village of Sontsevo in the Donetsk region. 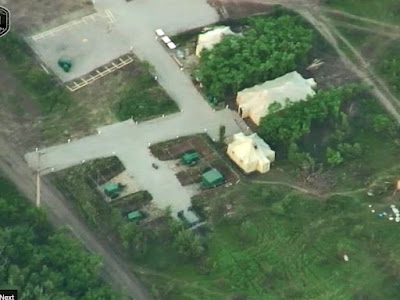 Two drone flights were made over the same area, two weeks apart.

Over that time, the camp grew from a small collection of tents and engineering vehicles into a fully-fledged forward operating base (FOB), complete with tanks, communications equipment, personnel quarters and even new roads.

What makes this already impressive discovery even more startling is the location—less than 12 kilometers from the Ukrainian front-line settlements of Hranitnoye and Novolaspa.

This area, to the east of Volnovakha and the Donetsk-Mariupol highway, has seen a slow but steady intensification of violence over recent months, as well as a buildup of Russian troops and armor in separatist-held territory behind the front lines.

What’s significant about where this Russian FOB is located is that it’s sandwiched between (Ukrainian-held Volnovakha) and (separatist-held) Telmanovo, and would therefore play a lead role in any forthcoming Russian offensive on Mariupol, the port city on the Sea of Azov which also happens to the economic powerhouse in the Donetsk region.

The separatists have nothing comparable to Mariupol in their possession and they want it, as Alexander Zakharchenko, the head of the so-called Donetsk People’s Republic, has stated repeatedly to journalists.

Reinforcements from this FOB would allow separatists to mount a pincer maneuver to cut Ukrainian forces in Mariupol off from support from the north.

I outlined such a plan at the beginning of this year and the evidence is now mounting that the Russians are indeed preparing for such a move.

Earlier this month, the Organization for Security and Co-operation in Europe reported spotting large quantities of armor and troops in Komsomolskoye and Razdolnoye, which respectively lie 15 and 10 kilometers from the base found by Dnipro-1.

On June 17 our team at The Interpreter reported on evidence culled from social media that proved the presence of a training camp in Razdolnoye, equipped with tanks, infantry fighting vehicles, and Grad rocket launchers.

But today’s video shows something much greater in scale.

When Dnipro-1 first flew over the area on May 20, they filmed around 70 troops, several trucks and engineering vehicles and construction equipment.

At least two T-72 tanks and a communications vehicle can also be seen.

Only 15 days later, on June 4, the regiment carried out another drone flight.

Russian military engineers had moved fast, constructing a large base, complete with new roads, a parade square, and trenches covering an area of around a hectare.

The roads are even lined with reflective markers.

We can now see at least nine T-72 tanks, one of which is equipped with mine-clearing gear, and several fuel bowsers, some of which are parked in protective dugouts.

At least one communications vehicle and an anti-tank gun can also be seen.

Tents for accommodation, meetings, and cooking are laid out across the camp.

Structures have been erected to mask some of the tanks from being seen from ground level and the whole complex is sheltered by woods.

This is quite clearly a base intended for a large-scale future deployment, one that could be instrumental in an assault to the west toward Volnovakha.

Just this morning, the Ukrainian military reported that Russian-backed forces had shelled Hranitnoye and Starohnatovka, two of the nearest frontline towns to Sontsevo.

This has been a regular occurrence, despite the “ceasefire” signed between both parties in Minsk last February, mere hours before the fall of Debaltsevo to the separatists.

But June has seen an increase in the number of attacks and, the military command in Mariupol said today, the range.

For the first time since the second Minsk talks, the past month has heralded renewed attacks on Ukrainian positions on the Donetsk-Mariupol highway itself.

Last night, the Ukrainians report, the frontline town of Novotroitskoye, just north of Volnovakha, was shelled.

It is in this context that the repeated assaults on Marinka, a southwestern suburb of Donetsk, should be evaluated.

Pushing the Ukrainians back from the area southwest of Donetsk and off the highway would allow the Russians to isolate and pin down the defenders of Mariupol from the north, while their forces continue to press through Shirokino on the Azov coast.

The rapid development of this base suggests the time for such an attack may be drawing nearer.

Nick Bolton said…
Are u serious reporting such rubbish ?
8:57 AM