US Warship Moves To Georgia Amid Ukraine Crisis

June 29, 2015
BATUMI, Georgia -- A US warship arrived Sunday in Georgia’s Black Sea port of Batumi on a training mission, the US embassy said, sending a message of support to the NATO aspirant amid the conflict in Ukraine. 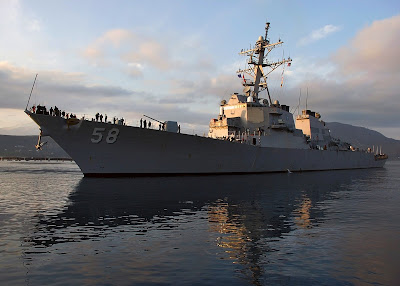 The US 6th Fleet’s guided missile destroyer USS Laboon “will conduct routine combined training with the Georgian Coast Guard,” the US embassy in Tbilisi said.

The port call “reaffirms the United States’ commitment to strengthening ties with NATO allies and partners like Georgia, while working toward mutual goals of promoting security and stability in the Black Sea region,” the embassy said in a statement.

Moscow’s seizure of Crimea from Kiev’s rule and its support for Ukrainian rebels have alarmed Georgia, which fought and lost a brief war with Russia in 2008.

The Ukraine crisis has triggered the worst confrontation between Russia and the West since the Cold War, and the US said last week it would deploy heavy weapons in central and eastern Europe in a move that angered Moscow.

US warships delivered humanitarian aid to Georgia in the wake of the Russia-Georgia conflict in August 2008.

Moscow criticised the decision to send the sophisticated warships, saying they were unsuitable for aid missions.