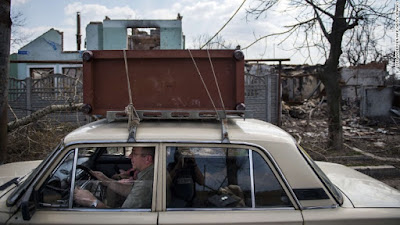 A resident fleeing from a local neighboorhood near Donetsk.

The sources stressed that no decisions have been made yet to put additional measures in place.

This week's renewed fighting triggered a discussion of additional sanctions, they said, but the fighting ended before a decision to act was made.

The sources said the potential new measures to be presented to Western leaders range from adding names and companies to the current sanctions to imposing broader penalties on Russia's financial, energy and defense sectors.

The point at which Russian military moves would prompt new sanctions is a case of "you know it when you see it," a senior administration official said.

"It could be any major assault anywhere across the line of contact. We all know what we are talking about, and we want to be prepared and have stuff ready to go in case we need it."

"There is a whole range of different options leaders will have available to respond to any renewed Russian aggression, to which we could respond pretty quickly and vigorously. We are not talking about weeks," the official said.

Discussion of additional sanctions comes as the EU is widely expected to renew trade and personal sanctions on Russia over its actions in Ukraine when they expire toward the end of the month.

Both the U.S. and EU have linked the lifting of sanctions to implementation of a peace accord hammered out in February by Russia with the leaders of Ukraine, France and Germany in the capital of Belarus.

The so-called Minsk II Agreement has been repeatedly violated.

The U.S. and EU claim that most of those violations were by Russia and the separatists it supports.

Some of the fiercest fighting since the agreement came this week, with heavy artillery fire reported near Donetsk.

The European parliament passed a resolution calling on EU governments to keep the measures in place after Russian President Vladimir Putin traveled to Italy Wednesday in what many in the West saw as a bid to break European solidarity on the sanctions.

"Europe has acted with more unity than most people expected, including Putin himself," one of the senior administration officials said.

"The concerns that we all began to feel about additional violations and suggestions there were troops and equipment coming across the border from Russia ... all that in fact was quite useful in getting European nations collectively to grasp that now is not the time to start softening the position we are taking on sanctions," the European diplomat said.

The extension of sanctions was one of his chief goals at this week's G7 meeting in the Bavarian Alps.

The sources said that while they prefer not to impose the new sanctions, they hope the knowledge that they are being prepared will deter Putin from taking further action.

"It is both preparation and also a degree of credible messaging," the European diplomat briefing reporters said.

"One is to make very clear that if there are further acts of aggression that we can move quickly. The other is to let it be known we are serious about being ready to do that as a deterrent."

The diplomat stressed, "We would rather not to have to do that, but it needs to be clear that if that is the direction Putin's Russia goes in, that we will react."

U.S. officials and European diplomats insist the sanctions are taking a toll on the Russian economy, where the ruble has plummeted in value.

But they admit the sanctions have done little to prevent Putin from continuing the campaign in Ukraine or curb aggression by separatists in Eastern Ukraine.

In total, more than 6,500 people have died in the fighting in Eastern Ukraine since the conflict began last year, according to the United Nations.