June 08, 2015
PISKY, Ukraine -- This frontline Ukrainian village lacks gas, power and water. Yet with barely a house left standing, Pisky remains a daily target of shelling, despite the latest truce with pro-Russian rebels, and Kiev's troops are digging down to survive. 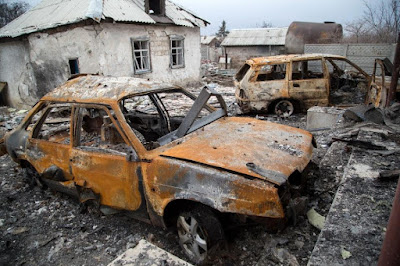 Burnt out vehicles are strewn next to a destroyed building in Pisky village, in the eastern Donetsk region, controlled by Ukrainian forces.

Before the separatist conflict erupted in the east of the ex-Soviet country 14 months ago, Pisky was home to 2,000 people, many of whom worked in the coal mining centre of Donetsk just three kilometres (two miles) away.

It was an important supply centre for troops trying to control Donetsk's international airport, and became a prized outpost once the militants finally seized the hub in January.

Pisky's residents fled for safety, with only a handful of elderly people still somehow managing to survive amid the mangled metal and piles of rubble today.

Their new neighbours are Ukrainian soldiers, who spend much of their time underground.

The troops like to remain inside a network of trenches facing southeast toward Donetsk, the well-armed rebels just 300 metres (328 yards) away.

"Man is an animal who can get used to living in conditions like this," said one soldier nicknamed Uncle Vova, short for Volodymyr.

Now 46, Uncle Vova lives with a dozen other soldiers in a two-storey house just behind the trenches.

They say the house was built by a businessman as his summer retreat.

It was abandoned when the first booms of warfare echoed over Ukraine's once-thriving rust belt.

Traces of its original use as a summer residence are still evident.

There is a small gym and a second outdoor kitchen in the garden.

The soldiers spend their time in the basement, where they sleep, eat and while away the time.

The television still works, using a generator, as does an ancient video player.

Tapes of Batman and Moby Dick are scattered nearby.

The soldiers say they prefer watching films to the news on TV.

That is hardly surprising, since the channels aired locally are only Russian or the one run by the rebels' self-proclaimed Donetsk People's Republic.

And to make life even remotely resemble the one before daily bloodshed, they have started gardening and planting vegetables.

In a central courtyard, a small farmyard is sprouting up.

"I've got five chickens, a rooster and a turkey," said an officer who goes by the call sign Farmer.

"There's even a small pig named Putin," he added, referring to the Russian president that most in Pisky blame for starting the war.

"We used to have Yanukovych, but we killed him and ate him on Victory Day," he said, invoking the name of the Kremlin-backed Ukrainian president ousted in the weeks preceding the fighting.

To wash, they have set up a small wooden outdoor hut that they prefer not to use more than once a week.

The shower drains precious water, which they get through irregular deliveries in plastic bottles.

But one man, 75-year-old Vasyl Bobyl, refuses to spend his nights sheltering underground like the other dozen or so residents still clinging on in the village.

"I'm not afraid," said Bobyl, a toothless man who has lived in Pisky for six decades.

"Those who can still walk have left, the others have stayed," said Bobyl, who walks with a limp.

His daughter, for example, has fled for Odessa, a southern port controlled by Kiev and a fairly safe distance away from the front.

A poster of a religious icon is pinned on one of the walls inside Bobyl's residence.

"That's my armour," he said with seeming irony.

"You see, all the other walls have been pierced with bullets or shrapnel. But this one is intact."