Ukraine Crisis: Ukraine's War Is Back

June 05, 2015
KIEV, Ukraine -- The war in Ukraine reignited Wednesday and, as always, each side is blaming the other for attacking. 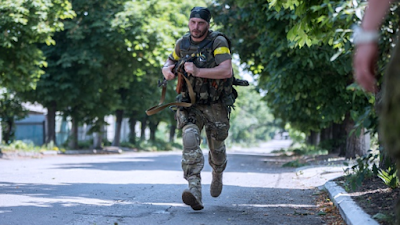 But there had been signs that a renewed rebel/Russian assault was imminent and, this time, the facts are pretty clear.

First, a week ago, Reuters reported on a buildup of troops, howitzers, unmarked tanks and other equipment at a base 30 miles from an unmonitored, unofficial border crossing.

The reporters observed and photographed three times as much equipment as they had seen in March, and trainloads more arriving daily.

There had been similar reports of a Russian arms buildup previously, but this one nailed it.

A day after that report, monitors from the Organization for Security and Cooperation in Europe reported seeing troops in regular Russian army uniforms.

The OSCE has been reporting since last year on unmarked convoys trundling into the conflict zone, but this was the first they'd seen troops brazenly wearing marked uniforms.

At the same time, in Moscow, officials were leading analysts to believe that President Vladimir Putin, after meeting with U.S. Secretary of State John Kerry last month, had given up on the so-called "Novorossiya project."

Putin, the story went, was getting the rebels to accept that they'd have to integrate with Ukraine, and on May 20 rebel leaders made just such an announcement.

The former (Russian) rebel defense minister Igor Strelkov said on his Facebook page that Putin's point man for Ukraine, Vladislav Surkov, visited Donetsk last week and, with lots of "yelling and vileness," told the rebels to dump their republic.

There are two ways to interpret this.

One is at face value: The rebels were being asked to give up on their dreams.

Even if so, the quid-pro-quo for agreement might logically be a summer offensive to establish the borders for a viable, self-sustaining statelet.

Equally overconfident Ukrainian actions since the rebel announcement may have prompted Putin to show he remains in charge of events in Ukraine.

He cannot afford to be seen to lose, or be ignored.

The second interpretation is that the "giving up" narrative is pure disinformation designed to help Russia blame Ukraine for the collapse of the February cease-fire agreement -- as it is doing -- and sow enough confusion to ensure that the offensive doesn't trigger new European Union sanctions or a U.S. program to arm the Ukrainians.

Either way, large-scale fighting resumed Wednesday morning, at which point Ukraine rushed heavy weapons back into the zone from which it had withdrawn them under the cease-fire.

This time, we have eyewitness testimony from the OSCE to confirm that it was the rebels who launched the assault on Marinka, near Donetsk, after drawing up heavy equipment and troops during the night.

Even so, Ukraine has made two decisions since the May 20 rebel announcement that may have precipitated the assault, or at least aided Russia in constructing a false narrative around it.

On May 21, the Ukrainian parliament suspended military cooperation with Russia, a huge step that includes ending Russia's right to resupply its troops (nominally peacekeepers) in the Moldovan separatist territory of Transnistria.

And on June 2, Ukraine appointed Mikheil Saakashvili, the former Georgian president who fought and lost a war with Russia in 2008, as governor of Odessa, which would be on the map of a fully realized Novorossiya.

Saakashvili's success in turning Georgia from a failed state into an investment destination remains under-appreciated, so this was a creative, if strange and desperate, move.

Yet he is also a red rag to Putin's bull.

The combination of these two steps has led Transnistria to call for Russian emergency aid, if needed.

Russian news media have been speculating that Saakashvili's new job is to start a war in Transnistria (as he did, in their view, in Georgia).

"Serious people are concerned about the implications of Ukraine's moves," Dmitry Trenin, the well-connected head of the Moscow office of the Carnegie Endowment for International Peace, told the Financial Times.

Although I have no insight into Putin's thinking, this looks bleak.

But if the extreme Russian interpretation of Ukraine's recent actions and the story of giving up on the rebels are, indeed, just smoke that's meant to minimize Western responses to a summer offensive, experience suggests it will work.