June 07, 2015
KIEV, Ukraine -- The senior international mediator in Ukraine quit as fighting worsened in the more than one year-old conflict between pro-Russian rebels and Ukrainian forces. 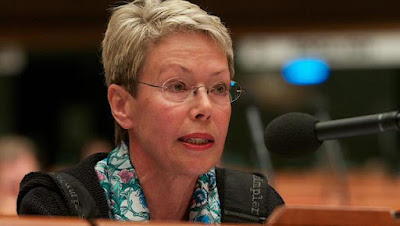 Heidi Tagliavini, a Swiss diplomat who played a key role in negotiating a February cease-fire and peace deal, has decided to resign as special envoy of the Organization for Security and Cooperation in Europe, Switzerland’s Foreign Ministry said Saturday.

The resignation came as Canada’s Prime Minister Stephen Harper pledged officers and funding to bolster the Ukrainian police force during a visit to Kiev, in his country’s latest show of support for Ukraine in its standoff with Russia.

“Tagliavini’s resignation reflects her growing frustration and is another sign that the peace process is basically dead,” Joerg Forbrig, a senior program director at the German Marshall Fund of the U.S. in Berlin, said by telephone.

“The expectation is we will see an escalation this summer.”

Ukraine’s military this week said it repelled an attack by as many as 1,000 pro-Russian separatists on the Donetsk-region town of Maryinka.

Despite the cease-fire, there were 500 explosions in the embattled Ukrainian city of Donetsk within one hour on the night of June 4, OSCE spokesman Michael Bociurkiw said in Kiev.

Ukraine and its partners, including the U.S and the European Union, accuse Russia of stoking the conflict by sending personnel and weapons.

The Kremlin has denied military involvement.

Some 6,400 people have died, according to the United Nations.

The confrontation has provoked the worst crisis between Russia and the West since the Cold war and led to sanctions against the Kremlin that helped to push Russia into its first recession in six years.

“I’m not very happy that Heidi is leaving us as we learned to work with her over this period, she listens to our arguments,” Pushilin said in an interview with Russian radio station Russkaya Sluzhba Novostei.

“We expect an objective approach from her successor.”

Ukrainian ex-President Leonid Kuchma, who represents the government in Kiev at the peace talks, also said he regretted Tagliavini’s departure.

He praised her “constructive” work, according to the Interfax news service.

Tagliavini, a Swiss diplomat fluent in Russian, served as the OSCE envoy to the Trilateral Contact Group that has brought together the Ukrainians, Russians and separatists.

Known among other diplomats as “the facilitator,” she earned the trust of all sides, according to Russian, Ukrainian and separatist officials.

Harper made the announcement of aid for the police alongside Ukraine Prime Minister Arseniy Yatsenyuk in Kiev during a one-day visit before a Group of Seven nations summit in Germany, which begins Sunday.

The conflict with Russia is “very high on Canada’s agenda” heading into the G7, Harper said.

“Canada will not, and the world must not, turn a blind eye to the near-daily attacks that are killing and wounding Ukrainians here on their own soil, soldiers and civilians alike.”

Russia accuses Ukraine of failing to implement the February peace agreement, which promised autonomy for the Russian-speaking east.

The likelihood is that the pro-Russian rebels will avoid mounting a large-scale offensive, such as one aimed at seizing the key port city of Mariupol, according to Forbrig.

This is both because militarily that could entail major losses and provoke more U.S. and European sanctions, he said.

“Salami-style tactics could see local attacks on particular targets. This is the approach they are likely to take to avoid a large-scale response,” Forbrig said.