Shell To Withdraw From Shale Gas Exploration In Eastern Ukraine

June 13, 2015
KIEV, Ukraine -- Royal Dutch Shell has notified Ukraine that it will pull out of a shale gas exploration project in the east of the country, where government forces are battling Russian-backed separatists. 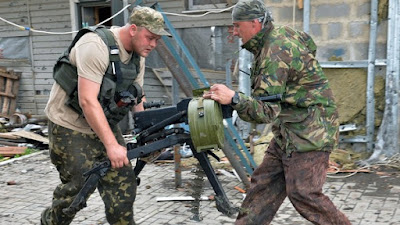 Shell is pulling out of a shale gas exloration project in eastern Ukraine where government forces have been fighting pro-Russian separatists.

Shell's decision is the latest example of how the conflict is exacting a heavy toll on Ukraine’s economy and dashes the cash-strapped government’s hopes of raising up to $10bn of investment and diversifying away from Russian gas imports.

Citing a “Notice of Withdrawal” from this week, seen by the Financial Times, insiders said the company’s decision follows heightened geopolitical risk and a sharp plunge in global oil prices, which has made costly shale gas exploration projects less attractive.

Shell said it “has been prevented from performing its commitments under Yuzivska [production sharing agreement] for an extensive period of time due to force majeure, ie circumstances beyond Shell’s control”.

The company added: “Due to the said events, project implementation conditions have been materially changed.

“Therefore, we have begun discussions with the Ukrainian government and our partner Nadra Yuzivska LLC on the way forward with the PSA, pursuant to its terms.”

Shell, which continues to hold downstream and gas trading interests in Ukraine, froze operations of the shale exploration project in July 2014 after full-scale battles erupted in the breakaway eastern region.

The company said it took the “contractual step of declaring force majeure on some specific obligations of the Yuzivska PSA”.

Shell’s formal decision to withdraw from the Yuzivska project comes nearly six months after US-based Chevron notified Ukrainian officials that it was pulling out of another shale gas exploration project in western regions of the country that was hyped as a potential $10bn investment.

“The much hoped-for shale gas boom has gone bust,” an insider said.

Ukraine would, however, seek to lure other investors into the costly, but strategically important, projects, the insider added.

A pullout by both companies from agreements that where hailed as “game-changing” investments when they were signed in 2013 is a cruel blow to a country desperate to lure investors amid shrinking foreign direct investment and surging capital flight.

The International Monetary Fund, after bailing out Kiev with a $17.5bn loan programme this year, has downgraded its forecast for Ukraine to 9 per cent annual contraction.

The fund also forecast year-end inflation of 46 per cent after first-quarter gross domestic product fell 17.6 per cent year on year.