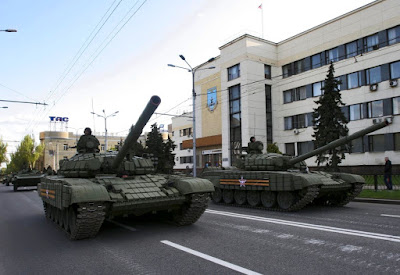 Pro-Russian rebels drive Russia-supplied tanks during a rehearsal for the Victory Day military parade in Donetsk, Ukraine May 5, 2015.

After weeks of military buildup and operational expansion along the front line, the Russian-backed forces stormed government-held military positions immediately west of the separatist stronghold of Donetsk before being driven back by Ukrainian troops.

A sustained Russian-backed offensive on these frontline positions may function as component of a larger maneuver to push south along the strategic Donetsk-Mariupol highway.

The maneuver around Donetsk may also be part of a coordinated tandem offensive, a signature of Russia’s hybrid operations in eastern Ukraine.

Russian-backed separatists may synchronize the offensive west of Donetsk with a maneuver operation around the city of Artemivsk, a gateway to Ukraine’s regional military and administrative headquarters.

Moscow and the separatists may apply a large-scale tandem offensive to bully Kiev into a peace settlement on their own terms for the third time in a year.

The timing of the offensive on the morning after restarted ceasefire negotiations, which Kiev accused the Russian delegation of abandoning, points to the existence of a political objective behind the operation.

Since March, Russian and separatists have accused Kiev of flouting the key political component of the February ceasefire agreement, namely the constitutional recognition of the autonomy of occupied eastern Ukraine.

The Kremlin may have ordered the launch of maneuver operations to not only expand the territory of the separatist “republics” but also to coerce Kiev into giving them legitimacy.

Russian-backed separatists launched an offensive maneuver in eastern Ukraine early Wednesday morning, May 3, shattering the last semblance of a loose 100-day ceasefire that the separatists have steadily dismantled since April.

Wednesday’s assault on Ukrainian positions west of the separatist stronghold of Donetsk is the largest the Russian-backed forces have mounted since their February 18 capture of Debaltseve, a key transit hub.

The preparations for this offensive have been underway since April, prompting ISW to issue two warning intelligence products.

Russia and the separatists may be applying sharply intensified military force not only to seize strategically important terrain but also to push Kiev into granting autonomy to the territory the hybrid forces have captured over the past 14 months.

International monitors from the Organization for Security and Cooperation in Europe (OSCE) recorded the movement of columns of heavy weapons moving toward southwestern Donetsk in the hours preceding the attack.

According to the Ukrainian military, ATO forces in the area endured two large waves of assaults which killed at least three Ukrainian soldiers, wounded over 30, and left Marinka and Krasnohorivka in flames.

Ukraine’s military claimed to have repelled the separatist maneuver after a reportedly 1,000-man combined arms force made inroads into the government-held areas west of Donetsk.

The general staff of the Ukrainian armed forces announced that it redeployed heavy artillery withdrawn under the ceasefire agreement to the front line in response to the separatist offensive.

Reports of heavy shelling inside DNR-held Donetsk suggest that Ukrainian troops targeted the urban terrain that the separatists appear to have been using as a shielded launch point for attacks.

Ukrainian forces claimed to have cleared separatist mechanized infantry from the town of Marinka, which separatist forces partially captured earlier in the day.

ATO forces reportedly withdrew into Marinka from a checkpoint on a highway linking Donetsk to Ukrainian-held Zaporizhia, the capital of the neighboring province to the west.

The escalation of separatist offensive activity along the front line since April 2015 places the maneuver west of Donetsk in the context of the larger Russian-backed military operation in eastern Ukraine.

Following the capture of Debaltseve, both the separatist and Ukrainian forces began withdrawing heavy weapons in accordance with the February “Minsk II” ceasefire agreement.

The separatists continued to engage Ukrainian forces with indirect fire around key areas, most notably the ATO positions north of Donetsk and east of Mariupol, the strategic city that anchors the highway from the separatists’ republics to Russian-held Crimea.

Separatist forces began redeploying heavy weapons to the front line in April under the guise of preparations for May 9 “Victory Day” military parades.

Russia and the separatists have adapted Soviet operational art to their hybrid campaign in order to penetrate the Ukrainian front.

The separatists gradually increased attacks from heavy weapons banned under the ceasefire agreement as the Russian-backed forces began bolstering their offensive capabilities along the front line in April.

Over the course of several weeks the separatists broadened their offensive operations, expanding their artillery targets from a few key Ukrainian positions to the majority of the front line.

The separatists’ operational shift from isolated shelling to widespread attacks across a large front disguised preparations for the maneuver west of Donetsk, an area untouched during the ceasefire period until the night of May 27.

Russian-backed separatists engaged Ukrainian forces around other key areas as the offensive transpired west of Donetsk and in the day following the maneuver.

At least two incidents of shelling deep into Ukrainian territory were reported from June 1 to June 3, demonstrating longer range than the separatists have typically exhibited in the “Minsk II” ceasefire period.

Several attempts by the separatists to break through the frontline in areas away from Donetsk were reported during the same timeframe including at least one successful penetration.

The separatists may have engaged ATO forces around other potential targets in order to prevent Ukraine from concentrating troops around Donetsk.

Continued dispersed attacks also enable the separatists to probe for weak points in the Ukrainian defenses in order to launch a second synchronized maneuver.

In August and early September 2014, Russian-backed separatists conducted a maneuver to envelop the rail hub of Ilovaisk while a regular Russian armored column opened a new front in the conflict by seizing coastal terrain along the Azov Sea.

These tandem offensives brought Kiev to the negotiating table with the separatists and Moscow.

The two ceasefires out of these negotiations allowed Russia to gradually bolster the military capacity of the separatists and consolidate the territorial gains made during the hot war into defensible proxy political entities.

It is likely that Russia and the separatists will reapply this operational design in the current offensive to maximize territorial gains before Ukrainian forces are able to form a coherent response.

The Russian-backed separatist offensive around Marinka and Krasnohorivka may serve several operational and strategic objectives that are not mutually exclusive.

These two urban areas lay between the separatists and a major government-held reservoir and thermal power plant in the city of Kurakhove, 20 kilometers west of Donetsk.

These infrastructure points provide clean water and energy for many separatist-held areas.

Separatist leaders have highlighted the priority of securing major infrastructure points as a means to create viable states independent of Kiev.

Separatists have often targeted Ukrainian-held energy infrastructure along the front line, resulting in regular outages particularly during the winter period.

Kurakhove’s strategic position on elevated terrain would also make it highly defensible as a westernmost point of separatist control.

Separatist penetration beyond Marinka and Krasnohorivka would reveal Kurakhove as the probable target of the maneuver.

The maneuver launched on June 3 is more likely part of an operation to seize the northern leg of the Donetsk-Mariupol H20 highway.

Russian-backed forces began shelling both Marinka and areas of the highway south of Donetsk at the end of May after three months of inactivity and continued to target the Ukrainian positions on the highway during the offensive maneuver.

The coincidence of attacks west and south of Donetsk suggests that these efforts are part of a single coordinated operation to seize the H20 highway.

Marinka acts as the forward most Ukrainian positon to southwestern Donetsk, a primary axis from which the separatists would likely launch an assault on that road.

The capture of the government-controlled highway is a necessary precondition for a Russian-backed siege on the strategic port city of Mariupol.

A separatist advance into Marinka and intensified targeting of Ukrainian positions south of Donetsk would indicate that the H20 is the target of the operation.

If the tandem offensive is underway, Russian-backed separatist offensive operations will likely sharply intensify around a government-held pocket between the separatist frontline cities of Horlivka and Pervomaysk.

The second Russian-backed maneuver in this set would likely focus on the highway between separatist-held Debaltseve and Ukrainian-controlled Artemivsk.

Artemivsk is strategic gateway to the Kiev-backed regional government and the ATO headquarters in northern Donetsk Oblast.

Separatist forces are well positioned to attempt to encircle Artemivsk from the western and eastern flanks.

Separatist forces demonstrated that the city is in range of both their artillery systems and their infantry sabotage groups on the night of June 1 by launching small attacks around Artemivsk, 15 kilometers (9 miles) beyond the front line.

The decision of the separatists, and likely Russian President Vladimir Putin himself, to launch an offensive as ceasefire negotiations resume likely indicates their intentions to apply military force to extract political concessions from Kiev.

Representatives from Ukraine, Russia and the separatist “republics” gathered in the Belarussian capital on the eve of the offensive to discuss the implementation of the February “Minsk II” agreement.

They met in small working groups to discuss clauses of the agreement ranging from prisoner exchange to a Ukrainian constitutional amendment recognizing the autonomy of the separatist-held territory.

The latter issue has been the primary focus of Russian and separatist criticism since March since they accused Kiev of reneging on this key political clause of the ceasefire agreement.

Rather than recognizing the territories as autonomous, Ukraine’s parliament passed a law that classified them as “temporarily occupied” until internationally monitored local elections were held that would effectively bar the participation of the separatist leadership.

While few details have emerged from the June 2 consultations, Ukraine’s Prime Minister Arseniy Yatseniuk accused Russia of walking out on the talks and promptly ordering the launch of an offensive.

Moscow and its proxies are again fighting in order to impose their own negotiating terms on Ukraine.

Source: Institute For The Study Of War