June 10, 2015
GARMISCH PARTENKIRCHEN, Germany -- Barack Obama has used the close of the G7 summit in Germany to deliver his strongest criticism yet of Vladimir Putin, lambasting the Russian president’s isolationist approach as the seven leaders signalled their readiness to tighten sanctions against Russia if the conflict in Ukraine escalates. 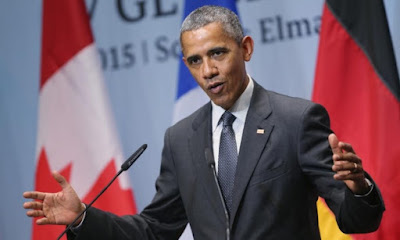 At the G7 summit, US president warns that ‘additional steps’ could be taken if Russia were to ‘double down’ on behaviour in Ukraine.

“Does he continue to wreck his country’s economy and continue Russia’s isolation in pursuit of a wrong-headed desire to recreate the glories of the Soviet empire? Or does he recognise that Russia’s greatness does not depend on violating the territorial integrity and sovereignty of other countries?” the US president said at the close of the intensive discussions in Bavaria as world leaders, including the summit’s host, Angela Merkel, presented a united front against Putin.

The German chancellor stressed that while she hoped the situation in Ukraine would not worsen, the G7 leaders were prepared to implement tougher sanctions if it did.

We are “ready, should the situation escalate – which we don’t want – to strengthen sanctions if the situation makes that necessary but we believe we should do everything to move forward the political process of Minsk”, Merkel said.

Obama warned that if Russia were to “double down” on what he called its “aggressive behaviour” in Ukraine, “additional steps” could be taken.

Merkel, who maintained a sporadic line of communication with Putin through the early stages of the conflict, stressed that current sanctions would remain in place until Russia cooperated with implementing a peace plan agreed in Minsk in February.

The European members of the G7 – Britain, Italy and France – said they would support the extension of the main EU sanctions when they meet later this month.

Obama had come to Bavaria on Sunday with the intention of pushing for a tougher approach to Russia.

And while Merkel was keen to stress that the Ukraine crisis had not dominated the two days of talks, it was certainly the uppermost topic in the coverage.

Russia was suspended from the G8 last year over its occupation and annexation of Ukraine’s Crimea region and its backing of separatists in eastern Ukraine.

The G7 leaders pledged to intensify their support for Ukraine’s reform and economic growth programmes, but refused to be drawn on the subject of military aid.

Some of them already deliver support under bilateral agreements.

In its 17-page communique, the G7 warned: “We also stand ready to take further restrictive measures in order to increase [the] cost on Russia should its actions so require.”

A Kremlin spokesman said earlier in the day that while Russia had paid attention to the latest threats of sanctions, the G7 had produced no “new theses”.

Dmitry Peskov said he believed the G7 leaders were far from united in their approach to Russia.

“We also draw attention to the fact that among the participants of this meeting there are nuances in their approaches. Some talk about the need for dialogue with Russia and the impossibility of solving serious problems without this dialogue, so we continue watching closely,” he said.

Speaking elsewhere on Monday, the Russian foreign minister, Sergei Lavrov, said that western countries were obliged to ensure that Kiev also stuck by the terms of the Minsk agreement it had agreed on, including withdrawing heavy weapons and allowing more autonomy in separatist-held regions.

“We proceed from the point of view that Germany and France, other colleagues in the EU and the United States … work with the Ukrainian authorities, encouraging them to honestly fully implement the Minsk agreements,” he told a press conference.

Merkel said that in discussions with leaders from African countries and Iraq, the delegates had “agreed to work together to further combat terrorism”.

Meanwhile it emerged that Russian trolls have been attacking an Instagram account newly-opened by Merkel before the summit, to which she had posted more than 50 photographs.

Many of the comments were critical of her and praised Putin.

Some warned that Russians would “soon be in Berlin again” in revenge for Merkel’s criticism of Putin.

Elsewhere the G7 agreed on climate change reforms, including the phasing out of fossil fuels by the end of the century, and pledged to eradicate extreme poverty by 2050.

A protest planned to round off the summit fizzled out after organisers complained of fatigue.

But the environmental pressure group Greenpeace secured the most publicity of all the protests, with the message it projected in a green laser beam on the escarpment of a local mountain, reading: