June 07, 2015
KIEV, Ukraine -- Stephen Harper has returned to Kiev just as the war in eastern Ukraine erupts again with hundreds of explosions over two days that threaten to shatter an already tattered ceasefire in the region. 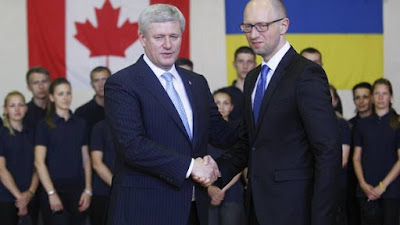 Ukrainian Prime Minister Arseniy Yatsenyuk (R) welcomes his Canadian counterpart Stephen Harper during their meeting in Kiev on June 6, 2015. Prime Minister Harper visits Ukraine ahead of a G7 summit in Germany this weekend.

He brought with him members of Canada’s Ukrainian diaspora who are raising funds and bringing gear to help their ancestral home fight a conflict that shows no signs of abating.

These include a Canadian representative of Army SOS which recently bought a $30,000 radio direction finder which can help the Ukrainians locate the source of enemy radio broadcasts.

Ukraine capital’s Independence Square is no longer crowded with the tents of Maidan protestors who led the ouster of pro-Russian president Viktor Yanukovich in early 2014.

But the ensuing war with Russian-backed rebels still hangs over the country.

Ukraine reinstated military conscription in 2014 to deal with the rebels and this year it’s calling up tens of thousands of young people to join the fight.

An official with the Organization for Security and Cooperation in Europe, which is trying to monitor the conflict, said the tempo of the renewed violence is remarkable.

“This is something we’ve not seen before,” Michael Bociurkiw told reporters.

“We do see a slight widening of the conflict area and we do see flaring up in hot spots that have been quiet for some time.”

As Mr. Harper toured a police academy Saturday, the sounds of war continued to rock rebel-controlled Donetsk some 600 kilometres to the east.

Mr. Bociurkiw said this followed intense shelling on Friday when about 100 explosions were heard in Donetsk as well as heavy fighting around midnight local time on June 4 when around 500 explosions occurred.

“We’ve not seen or heard that type of intensity before.”

He said the OSCE’s drone that was trying to monitor the conflict saw a concentration of heavy weaponry coming from rebel-controlled areas and moving westward.

Both sides have now moved these type of armaments into the heart of the conflict – a violation of the February Minsk ceasefire deal.

“This is not the type of technology you find in a hardware store.”

He’s in Kiev to promote a new proposal to raise cash for the Ukrainian military.

Mr. Hareychuk, an optometrist by trade, is selling the idea of a landing tax to be levied on arrivals in Ukraine to help fund the fight against Russian-backed rebels.

His organization doesn’t buy weapons for Ukraine but it tries to offer Kiev’s forces the gear that can give them an edge on the battlefield.

“It’s beyond our comfort zone. We come up to a point but we have to abide by the laws of the land.”

He says Canadian export law forbids the shipment of not only weapons but also high-grade technology.

Even so, Mr. Hareychuk said he’s been surprised by the generosity.

The organization purchased a surveillance drone for Ukraine but it was eventually shot down by Russian-backed rebels.

Mr. Hareychuk said he was so emotionally invested in that drone shipment “I almost cried” when he was informed of its demise.

Recent donations to Army SOS have funded sterile orthopedic drills for use in military hospitals.

The OSCE’s Mr. Bociurkiw said the human cost of the Ukraine war is rising.

So many people in eastern Ukraine have been forced to flee their homes because of the fighting that Ukraine now ranks among the top 10 countries when it comes to numbers of displaced people.

“Right now we’re on the cusp of a worsening humanitarian situation,” he said.

Russia’s ambassador to Canada is calling on Stephen Harper to press Ukraine to hold direct talks with the rebels in eastern Ukraine.

He’s so far resisted Kiev’s request for defensive weapons to beat back the pro-Moscow separatists.

He announced a $5-million project Saturday that will deploy up to 10 Canadian police officers across Ukraine to help reform the country’s security sector.

Canada is partnering with the United States and the Ukrainian government to build a new civilian patrol police force.

The objective of the project is to help change the way police interact with the public and the manner in which they fight crime and handle emergencies.

Canada will focus on community policing, where officers are out in neighbourhoods and it will supply protective gear and uniforms.