Defying Obama, Many In Congress Press To Arm Ukraine

June 12, 2015
WASHINGTON, DC -- With the peace process stalled and violence escalating in Ukraine, a bipartisan coalition in Congress is defying President Obama and European allies by pressing the administration to provide weapons to the embattled nation. 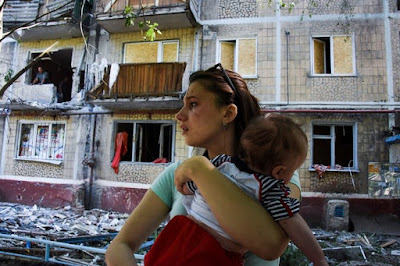 A woman and her baby on Thursday near their house, which was damaged by shelling in the Ukrainian town of Horlivka.

The Senate has included provisions in its military policy bill to arm Ukraine with antiarmor systems, mortars, grenade launchers and ammunition to aid in its fight against Russian-backed separatists.

It would also prevent the administration from spending more than one half of $300 million in aid for Ukraine unless 20 percent is earmarked for offensive weapons.

The House has passed a similar measure.

So far, the Obama administration has refused to provide lethal aid, fearing that it would only escalate the bloodshed and give President Vladimir V. Putin of Russia a pretext for further incursions.

The push by lawmakers to arm Ukraine’s beleaguered armed forces threatens to open a rift between the United States and key allies, especially Germany and France, at a time when the Obama administration has been working to demonstrate unified support for extending European economic sanctions against Russia that are scheduled to expire at the end of July.

Legislation to authorize lethal military aid for Ukraine has gone to the White House before, but Mr. Obama has not acted on it.

And while this bill authorizes the weapons it cannot compel the administration to send them.

The measure is largely meant to put renewed pressure on the White House.

Senator John McCain, Republican of Arizona and the chairman of the Senate Armed Services Committee, who has championed the effort to send arms to Ukraine for more than a year, dismissed the fears that it would worsen the conflict and unravel the international coalition.

Citing the attacks on Ukraine as “one of the most shameful and dishonorable acts I have seen in my life,” Mr. McCain said in an interview that the response so far to Russia’s aggression had been insufficient.

“They are not asking for a single boot on the ground,” he said on the Senate floor Thursday, adding, “I am a bit taken aback by the vociferous opposition” to weapons help.

Earlier this week, the Ukrainian prime minister, Anseniy P. Yatsenyuk, met with lawmakers in Washington to make the case for military and financial aid, and was met with sympathy.

“There has been a strong bipartisan well of support for quite some time for providing lethal support,” said Representative Adam Schiff, Democrat of California.

“We have offered Russia all kinds of exit ramps and they were clearly not interested in taking them.”

But in the latest sign of the reluctance by the White House, Samantha Power, the United States ambassador to the United Nations, gave a speech on Thursday in Kiev, the Ukrainian capital, in which she excoriated Russia but did not mention sending offensive weapons as a possibility.

Instead, she focused on combating the Russian misinformation campaign, praising the Ukrainians for undertaking a government overhaul and warning only vaguely of a tougher stance by the United States.

In Kiev on Thursday, a Ukrainian military spokesman reported that three soldiers had been killed in attacks by Russian-backed separatists, and at least 13 were wounded in the latest fighting in Donetsk and Luhansk.

Officials from the self-declared, pro-Russian separatist republics said that two of their soldiers had been killed and at least two more wounded in attacks by the Ukrainian military.

While the United States has been providing nonlethal assistance, and American military instructors have begun training Ukrainian troops in western Ukraine, President Petro O. Poroshenko has also made clear he would welcome more help in the form of weapons, as he seeks to build up his country’s military to face down the threat from Russia.

“We have an effective form of cooperation, but not with lethal weapons, with the United States, Canada, U.K.,” Mr. Poroshenko said in an interview in his office last week.

“We are very satisfied with the current level of cooperation but we would be happy if the level of this cooperation would be increased.”

The bipartisan pressure developing on Capitol Hill, however, comes at an awkward time.

Putin in recent days has repeatedly blamed the Ukrainian government for continuing cease-fire violations, while calling on the United States and its European allies to pressure Kiev to fully put the peace accord in place.

That has set the stage for a pitched debate between lawmakers and the White House that could well undermine Mr. Obama’s repeated assertion that the United States sees no military solution to the conflict in Ukraine.

“I have never seen a more aggressive and emotional debate than I have on this question,” said Matthew Rojansky, the director of the Kennan Institute in Washington and expert on Russia and Ukraine.

Mr. Rojansky said the debate is “reminiscent of that when the Soviet Union invaded Afghanistan.”

Reflecting the view of many experts, Mr. Rojansky added, “There are valid arguments on both sides but you don’t get to walk this back. Once we have done this we become a belligerent party in a proxy war with Russia, the only country on earth that can destroy the United States. That’s why this is a big deal.”

In his confirmation hearing in March, Ashton B. Carter, the secretary of defense, told senators that he would consider increased military assistance to Ukraine, including the sale of lethal arms, reflecting the views of some other senior administration officials.

If Congress moves forward with restrictions on the money allocated for Ukraine, a standoff with the White House could also conceivably block much-needed nonlethal aid.

And it is not clear that the Ukrainian military is sufficiently trained to make proper use of American weapons without substantial assistance by American military personnel, or that the weapons would not end up in enemy hands.

“If you’re playing chess with Russia you have to think two moves ahead,” said Senator Angus King, independent of Maine, who is among those lawmakers skeptical of providing arms.

“I am afraid this could provoke a major East-West confrontation.”

Julia Osmolovskaya, the managing partner of the Institute of Negotiation Skills, a mediation group in Kiev, said Ukrainians were divided over the potential benefits of receiving weapons from the United States and the inherent risk of stoking further violence, and also perplexed by Washington’s mixed messages.

Unknown said…
I like a particular article! You explained this in a simple way and it’s very appropriate finding here.

Supernatural Jacket on Newamericanjackets
1:38 AM

Unknown said…
This comment has been removed by the author.
2:09 AM

Unknown said…
This comment has been removed by the author.
2:14 AM