May 14, 2015
ODESSA, Ukraine -- A clutch of rusty old naval boats bob about mournfully in the Black Sea off the harbour of Ukraine's southern city Odessa near an ageing missile boat. 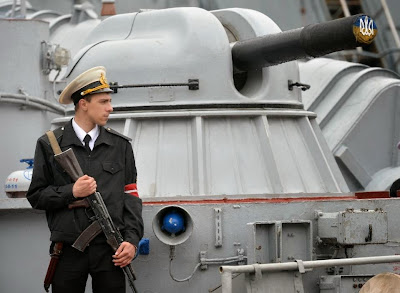 "The only way to get those pieces of junk moving is to get some paddles and start rowing," an officer says derisively.

These are the sad remnants of Ukraine's navy.

Already in a sorry state after years of corruption and neglect, the force was eviscerated when Russia seized the Black Sea peninsula of Crimea in March last year.

Moscow snatched the pride of the fleet which was moored in its strategic ports, and convinced thousands of sailors to jump ship.

"It was a tragedy for our navy", officer Vitaliy Martynyuk, who was studying in the Crimean city of Sevastopol at the time of the annexation, says dejectedly.

Military expert Serhiy Zhurets says that with the annexation of Crimea, Ukraine lost two-thirds of its navy.

All the most important ships by class and capability are now stuck in the occupied territory and that represents a big problem for Ukraine, he says.

"We need a huge amount of effort and expenditure to create a new fleet from scratch," Zhurets says.

"There is nothing left of it".

The flagship Hetman Sahaidachniy moored now in Odessa, was only saved from the occupation by pure chance.

When Russian special forces soldiers without insignia started seizing strategic locations around Crimea, the frigate was on its way back home from a training mission in the Gulf of Aden.

Nearby, the missile boat Pryluky is one of the few ships that managed to return to continental Ukraine after the annexation of Crimea.

But it is in such a sorry state that the crew jokes it was much cheaper for Russia just to give the boat back rather than dispose of it.

Russia and Ukraine did reach an agreement for the return of other vessels too, but this was suspended after a brutal conflict between pro-Russian rebels and government forces broke out in the east of the country.

In terms of personnel, the story is just as bleak.

Most of the others opted to join the Russian side.

The defection of so many of their comrades grates painfully for those who decided to stay in Ukraine's navy.

"There were many traitors among us," says senior lieutenant Petro Bondar, 26.

"When I studied, there were professors who used to talk about the advantages of serving in the Russian navy."

Bondar recalls with anger the names of the ships that he and his colleagues were forced to abandon to the Russians -- the corvette Ternopil and minesweepers Cherkasy and Chernihiv.

"Everyone expected them to be returned to Odessa. But it turned out much worse than expected," he lamented.

With their forces ravaged, Ukraine's top brass are desperately seeking for a light at the end of the tunnel.

Admiral Ihor Kabanenko, Ukraine's former deputy defence minister, says that most of the warships Kiev lost were Soviet-era relics and would anyway soon have become obsolete.

"What we need is a new strategy for the Ukrainian navy, a new vision of what it should be in the future," he told AFP.

"We have to make choices: either we create a new and effective naval force or we stand aside and watch as someone else takes away what is left".