Ukraine Conflict: Will The Ceasefire Hold?

May 12, 2015
DONETSK, Ukraine -- The BBC's Tom Burridge has spent the past month in eastern Ukraine. Here is his snapshot assessment of the latest situation on the ground. 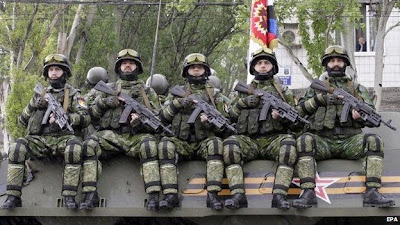 These pro-Russian rebels, near Mariupol, are seen wearing Russian-supplied uniforms, carrying Russian arms and sitting atop a Russian military vehicle. Yet Putin continually denies that he is providing the rebels in Ukraine, with armaments and other supplies.

Is the ceasefire in Ukraine holding?

No. There is fighting pretty much every day.

It is nothing on the scale of what was happening around the time of the Minsk agreement, which took effect on 15 February.

However, on certain days, in certain areas, the fighting has spiked.

According to reports, neither side has sustained very high casualties since mid-February.

However, on 6 May Ukraine's army said that five of its soldiers had died and 12 had been wounded in 24 hours.

Where is most of the fighting concentrated?

The village of Shyrokyne, to the east of the valuable port city of Mariupol, has probably seen the most intense fighting since February.

There is also continuing fighting to the north-west of the main rebel-held city of Donetsk, around the area of the villages of Pisky (Ukrainian-held) and Spartak (rebel-held).

There has also been a significant amount of fighting south of Avdiivka, a town held by the Ukrainian army.

In the region of Luhansk the fighting has been concentrated around the villages of Stanytsia Luhanska, Shchastya and Trokhizbenka.

Is the frontline moving?

Ever since the rebels took the town of Debaltseve, just after the Minsk agreement, neither side has launched a major offensive, so the frontline has not moved significantly since then.

However, the Ukrainian government said on 5 May it had lost full or partial control of 28 towns and villages since 18 February, three days after the Minsk deal took effect.

Could the conflict be reignited?

Due to the rhetoric on both sides, and the fact that the fighting continues despite the ceasefire agreement, many people believe it is only a matter of time until the conflict flares up again.

The rebels' stated aim is to take control of the whole of the two most easterly regions of Ukraine: Donetsk and Luhansk.

Ukrainian President Petro Poroshenko recently said, rather fancifully, that the war would end only when Ukraine recaptured Crimea (annexed by Russia in March 2014).

Both sides continually accuse the other of preparing a major offensive, and of using and building up heavy weaponry near, or on, the frontline.

One significant fatal incident, intentional or otherwise, could act as a spark for the war to escalate again.

What will the Kiev government do next?

The International Monetary Fund (IMF) predicts that Ukraine's economy will contract by a staggering 5.5% this year.

Without more significant support from its allies in the US and Europe, Ukraine will struggle financially to take the fight to the rebels.

The economic picture is also bleak in rebel-held eastern Ukraine.

Many young people have left the region, so the working-age population has shrunk.

A disproportionate number of elderly people have not been receiving their pensions from Kiev.

No banks are open, and many businesses have shut.

With Russia's economy suffering too, Ukraine's government might prefer to leave the burden of propping-up the two rebel self-proclaimed republics to Moscow, accused by Kiev of fuelling the war.

What about the rebels?

Given the bleak economic prospects, the rebels might decide they have to take the main port city of Mariupol, or other parts of the region with heavy industry, to make their territory more viable.

However the pro-Russian armies in Donetsk and Luhansk know that another major offensive would risk provoking a stronger reaction from the West.

The US and other allies have so far provided training and non-lethal aid to Ukraine's armed forces, but as things stand, Western nations do not appear to be about to send weapons.

A fresh rebel offensive could change all that.

Hawkish voices in the US Congress have already pressed President Barack Obama to make a more decisive contribution.

The rebel armies are not one single coherent force.

Although in simple terms each of the two self-declared republics has an army, in certain parts of Luhansk, powerful individuals wield a high degree of influence.