May 10, 2015
DONETSK, Ukraine -- This time, there’s no denying the Russian footprint in eastern Ukraine. Inspired by Vladimir Putin’s yearly parade of military might on Red Square, separatists in Donetsk are following suit. 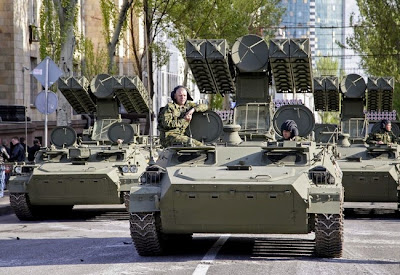 Separatist rebels’ 9K35 Strela-10 (SA-13 Gopher) Russia-supplied surface-to-air missile systems during the rehearsal for a military parade at the downtown of Donetsk, Ukraine, 05 May 2015.

A procession of tanks, rockets and howitzers roared through the rebel stronghold this week, rehearsing to mark the Soviet defeat of Nazi Germany on Saturday.

A band played communist tunes while onlookers cheered, even as the vehicles shredded the asphalt.

“I feel the festival mood,” said 18-year-old Rinat Galimzyanov, who works at a local carwash and wore ribbons in the red white and blue of the Russian tricolor.

“There are lots of tanks and I was pleased to see my friends marching.”

Putin denies his troops are involved in the conflict in eastern Ukraine, where more than a year of fighting has shaken Europe’s security.

Last year, Donetsk held a pro-separatist rally on Victory Day, while street battles erupted in the nearby port of Mariupol as the insurgency spread.

The two-hour rehearsal featured 1,500 fighters, who marched to Soviet wartime music and the anthem of their self-proclaimed Donetsk People’s Republic.

They clutched rebel flags alongside the USSR’s communist hammer and sickle.

Afterwards some had their children photographed with tank drivers.

Girls flocked to one of the most well known separatists, nicknamed Motorola, for pictures.

While Russia continues to lie that it’s not arming the rebels, it will be supplying something for the celebrations:

A shipment of 86,000 portions of ice cream arrived this week on a humanitarian convoy, to be distributed to children and at Saturday’s parade.