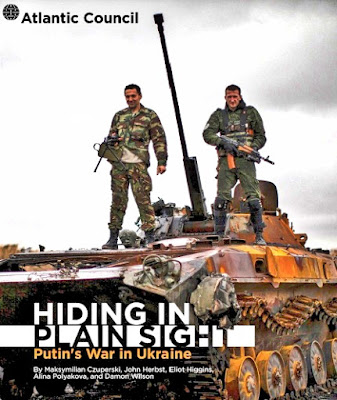 For twenty-five years, prominent members of the Atlantic Council community have worked to advance the vision of a Europe whole, free, and at peace in which Russia enjoys its peaceful place.

In fact, many in our community aspired not only for a strategic partnership with Russia, but envisioned an alliance between Russia and NATO contributing to international stability and security.

Unfortunately, Russian President Vladimir Putin’s actions in Ukraine today mock this vision and threaten the international order established at the end of the Cold War.

In hindsight, the West might have recognized and responded to Mr. Putin’s assertiveness much earlier.

Regardless of the moment of origin, however, it became clear in 2014, after Russia’s seizure and annexation of Crimea and its covert war in Ukraine’s east, that this major challenge to international security required a decisive and comprehensive response.

The Atlantic Council responded to this challenge in February 2014 by launching the Ukraine in Europe Initiative, with a focus on enhancing Ukraine’s security, advancing Ukraine’s reform process and economic prospects, and keeping attention on Russian-occupied Crimea.

If the international community cannot distinguish fact from fiction, or chooses not to do so in public, it is unlikely to coalesce around an effective strategy to support Ukraine and deter Mr. Putin.

This report, Hiding in Plain Sight: Putin’s War in Ukraine, is the Council’s contribution to offer clarity.

Russian propaganda frames the Ukraine crisis as a civil war.

In reality, the conflict in Ukraine’s east is a Kremlin- manufactured war—fueled by Russian-made military equipment, fought by Russian soldiers, and supported by Mr. Putin.

To reveal the full extent of Russian military intervention in Ukraine, the Atlantic Council has produced this study, using publicly available information and rigorous analysis.

This report is a result of the leadership and vision of Council Executive Vice President Damon Wilson and Director of the Council’s Dinu Patriciu Eurasia Center and former US Ambassador to Ukraine John Herbst; the dedication and tenacity of Associate Director of the Ukraine in Europe Initiative Dr. Alina Polyakova and social media savvy Special Assistant Maksymilian Czuperski; and the ingenuity of our key partner in this endeavor, Eliot Higgins of Bellingcat.

The information documented in this report draws on open source data using innovative socialmedia forensics and geolocation and is informed by team visits Ambassador Herbst led to Ukraine in March and April 2015, during which Maks and Alina also visited the conflict zone.

This effort would not have been possible without the support of those who have stood behind the Council’s work on Ukraine, including George Chopivsky and the Chopivsky Family Foundation, Ambassador Julie Finley, Frontera Resources, Ian Ihnatowycz and Marta Witer, Lenna Koszarny and Horizon Capital, James Temerty, the Smith Richardson Foundation, the Ukrainian World Congress led by President Eugene Czolij and Vice President Paul Grod, and the Patriciu family.

Only after the assassination of Boris Nemtsov, steps from the Kremlin, did the Council team learn about his efforts to expose Mr. Putin’s war.

While the work Mr. Nemtsov spearheaded remains distinct from the Council’s, our teams have subsequently coordinated the release of this report with Mr. Nemtsov’s report to reinforce our common message:

Mr. Putin led his nation into war against a peaceful neighbor and lied.

For the complete report please go to: https://dl.dropboxusercontent.com/content_link/iB36Txai0gCDtaoE6Pqm0aMvpvwKru7nBErXW199hNUOyWtre6wnIAfBUdAwR8lV