March 30, 2015
KIEV, Ukraine -- Ukraine said one soldier was killed in clashes with separatists, while regional officials said 22 tanks crossed the border from Russia into the conflict zone. 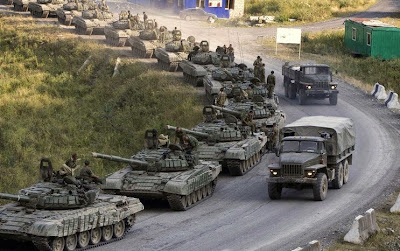 Three other soldiers were wounded in the past day as pro-Russian rebels fired on government positions, Ukrainian military spokesman Colonel Andriy Lysenko told reporters in Kiev on Monday.

“The situation in the east is being gradually stabilized. In the past 24 hours there were no cases of military vehicles, cannon and rocket artillery being used,” Lysenko said.

While casualties have waned following a cease-fire on Feb. 12 in Minsk, Belarus, fighting has sporadically erupted between government troops and separatists.

At the same time, Kiev is facing the increasingly onerous task of fixing an economy ruined by months of fighting, cracking down on corruption and negotiating new terms with international bondholders, including Russia.

The tanks entered Ukraine from the Russian town of Gukovo and moved toward Sverdlovsk in Luhansk region on March 28, the Donetsk regional government said on its website on Sunday.

Ukrainian forces broke the truce 13 times in the past day, the separatist-run DAN news service reported on Monday, citing the Defense Ministry of the self-declared Donetsk republic.

George Soros is ready to put $1 billion into “concrete investment ideas” for Ukrainian agriculture and infrastructure projects, the billionaire told Austria’s Der Standard newspaper in an interview published on Monday.

The hyrvnia, which has declined 33 percent against the greenback this year, the world’s worst performer, was little changed at 23.415 per dollar.

The probability the negotiations will fail and lead to a disorderly default is about 30 percent, according to the median estimate of 21 analysts surveyed by Bloomberg on March 20-26.