March 26, 2015
WASHINGTON, DC -- Russian President Vladimir Putin faces a formidable communications challenge because of the need to maintain domestic support for his actions in Ukraine—both among the elite and in society at large—while also trying to prevent the emergence of a more unified Western response to his policies. 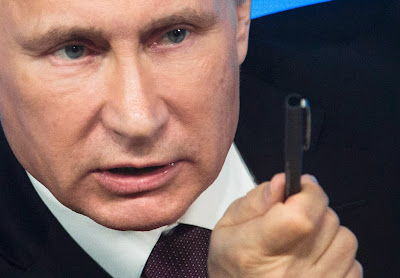 This agenda is complicated by Putin’s need to accommodate different elements within his domestic power base, which disagree over policy on Ukraine.

For the domestic audience, Putin’s priority, the message remains predictably nationalistic and triumphal.

On March 15, state television aired a two-and-a-half-hour documentary, Crimea: Journey to the Motherland, timed to mark the first anniversary of Russia’s annexation of Crimea.

Watched by one of the biggest television audiences in Russia in recent years, the film provided a hagiographical depiction of the Russian president as the architect and hands-on manager of the operation to save the majority-Russian population of Crimea.

Its narrative rested on graphic messages about the allegedly violent intentions of Western-backed Ukrainian nationalists.

It continued the Russian state media’s relentless vilification over the past year of Ukrainians and their Western supporters.

But the film also surprised in a number of ways.

Structured around excerpts from a long interview with Putin in the immediate aftermath of Crime’s annexation, it contained remarkable detail about how the operation was carried out after Putin and his security chiefs saw that they could exploit revolutionary turmoil in Ukraine by regaining control of territory that in their view had never ceased to be Russia’s.

Given the careful editing that must have been involved, the decision by the Kremlin to include Putin’s statement that the military plan for retaking Crimea was supported by nuclear deterrence measures was especially striking.

It indicated another audience for the film: the U.S. and its NATO allies.

This international audience will draw its own conclusions from the film. NATO countries will note that Putin’s justification for intervention in Crimea was ostensibly to save Russian lives.

Worryingly for Western governments, this could also apply to all the major cities in eastern Ukraine, not just the territories currently under the control of separatist forces.

Moreover, Putin’s frank admission, contrary to earlier denials, that he had sent regular military forces to Crimea as part of the plan to seize control of the peninsula further undermined the Kremlin’s line that Russia has not intervened militarily in the Donbass region.

Western capitals will also pay attention to the apparent evidence of command-and-control problems during the Crimean operation.

Putin said that one military unit did not deploy to its directed location because it believed that the commander in chief had changed his mind.

Putin had to intervene personally to resolve the issue.

When asked about the “buzzing” of the U.S. minesweeper USS Donald Cook in the Black Sea by a SU-24 fighter aircraft, Putin said that he had not given the order for this and that military commanders had “behaved like hooligans.”

More broadly, Western audiences will note that despite Putin’s public support for a peaceful settlement in the Donbass, Russian propaganda continues to keep up its high-pitched anti-Western, anti-Ukrainian rhetoric.

This continues to repeat the accusation that Western countries orchestrated the revolution in Ukraine in 2014 with the express intent of inflicting damage on Russia.

Together with Putin’s statements in the film, the recent start of military exercises involving elements of Russia’s northern, Baltic and Black Sea fleets sends a clear signal to the Russian audience, as well as to NATO countries and Kiev, that Moscow is not preparing to back down over Ukraine.

This, of course, runs counter to Russia’s efforts to conduct a charm offensive toward some southern European countries using economic blandishments.

These efforts aim to split the EU, and to undermine the West’s collective will to maintain sanctions against Russia and provide political and financial support to Ukraine.

Putin’s messages at home and abroad reflect a disturbing lack of policy options beyond maintaining pressure on both Kiev and the West to prevent Ukraine from developing on a Western model as opposed to a Russian one.

His continued references to Russians and Ukrainians as one people also show that he is in denial about the alienation that his policies have created between the two countries.

Within his power base, Putin appears to be trying to reconcile the views of two different groups on Russia’s strategy toward Ukraine.

One group favors taking all necessary measures now to disable Ukraine’s integration drive with the West, including openly testing NATO’s security guarantees to the Baltic states.

A smaller, less powerful group would prefer to play the long game by seeking a peace settlement in the Donbass and pulling Ukraine back into Russia’s sphere of influence over the longer term, but without breaking all ties with the West.

In an effort to balance between the two groups, Putin has been positioning himself as backing diplomacy based on the Minsk agreements while providing no indication of how Russia might achieve a broader peace settlement with Ukraine.

Putin’s silence on this issue is a powerful, albeit unintended, message to audiences in Russia, Ukraine and the West that he has created a crisis that has moved beyond his control.