March 23, 2015
CHICAGO, USA -- Ukraine’s plight against Russia is getting a lot of support from Chicagoans and a couple of U.S. Senators. 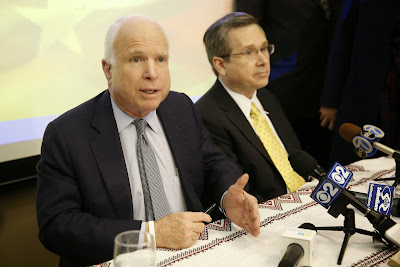 Sens. John McCain (L), and Mark Kirk meet with the media following an event with members of the Chicago-area Ukrainian-American community at the Ukrainian Cultural Center in Chicago.

At the Ukrainian Cultural Center a standing room only crowd listened to Illinois’ Mark Kirk and Arizona’s John McCain talk about how more U.S. support for the Ukraine is needed.

McCain told them Russia’s president isn’t going to stop with just that country.

The crowd treated the two senators like rock stars, especially when McCain joked about being sanctioned by Putin.

“It means I can’t spend spring break in Siberia again,” he said.