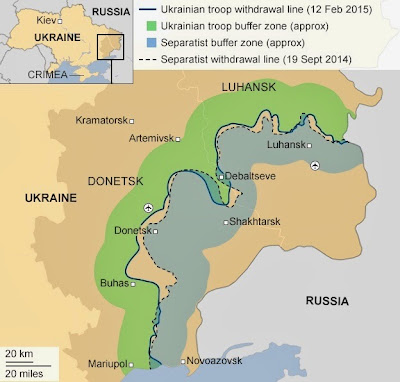 Alexander Vershbow said Russia's involvement was becoming more unpopular with the Russian public as a result.

Russian officials dismissed on Thursday a US claim that Moscow had sent "thousands and thousands" of troops to fight alongside separatists.

A foreign ministry spokesman said the figures were "plucked out of the air".

Ukraine and the West have long accused Russia of helping the rebels with weapons and soldiers.

Independent experts echo that accusation but Moscow denies it, insisting that any Russians serving with the rebels are "volunteers".

Alexander Vershbow, NATO's deputy secretary general, told a conference in Latvia: "Russian leaders are less and less able to conceal the fact that Russian soldiers are fighting - and dying - in large numbers in eastern Ukraine."

There was "mounting evidence that the Russian incursion into Ukraine is becoming much less popular among the Russian public", he added.

Earlier this week, Russian investigative newspaper Novaya Gazeta published an interview with a wounded tank gunner, who said that he was a regular Russian army soldier and had been fighting alongside rebels.

He said he had received thorough training in Russia before being sent to Ukraine.

Earlier, Ukraine's parliament passed a new law to increase the size of the country's armed forces to counter the threat from pro-Russian separatists in the east.

It will now go to President Petro Poroshenko, who proposed the measure, to be signed into law.

Meanwhile the government said its army had begun the second stage of pulling back heavy weapons on Thursday in line with the ceasefire agreed in Minsk last month.

A lull in fighting has led to hopes that the truce may broadly be holding.

Ukrainian military spokesman Vladislav Seleznyov said on Thursday one soldier had been killed on the frontline in the past day.

But he added that there had been no other serious fighting in the area.

Both Ukraine and the rebels say they are withdrawing heavy weapons from the front line, one of the requirements of the ceasefire deal made in the Belarusian capital.

Monitors from the OSCE security group have reported weapons movements on both sides but say it is too early to confirm a full withdrawal.

The UN says the conflict has claimed at least 6,000 lives since it started in April, although it says that the real number of fatalities could be considerably higher.

On Tuesday, the US army's Europe commander, Ben Hodges, said the US believed around 12,000 Russian soldiers were supporting the separatists.

But US Assistant Secretary of State Victoria Nuland on Wednesday told a congressional foreign affairs committee that Russia had deployed "thousands and thousands" of troops, without giving a precise number.

Russian foreign ministry spokesman Alexander Lukashevich rejected the figures on Thursday, saying they were "plucked out of the air".

Meanwhile, Russia's defence ministry said it had started military exercises involving some 2,000 troops in southern Russia, the breakaway Georgian territories of Abkhazia and South Ossetia and in Crimea, which was annexed by Russia from Ukraine last year.