March 28, 2015
MOSCOW, Russia -- Russian President Vladimir Putin has awarded several military units a hugely prestigious title that was given to troops for heroism during WWII, sparking new questions about the Kremlin's involvement in Ukraine. 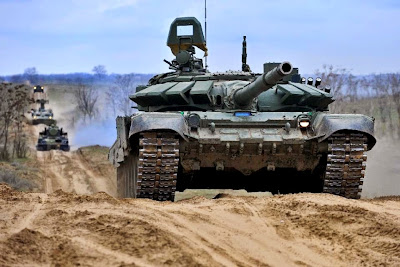 Putin this week bestowed the honorary "guards" title on two air assault brigades and a communications regiment, with the award being seen by some analysts as a tacit acknowledgement that Russian troops have been fighting in east Ukraine.

Under Stalin, the designation "guards" was given to Soviet troops that distinguished themselves through outstanding heroism as the Red Army struggled to halt the advance of Nazi Germany in 1941.

The defence ministry in Moscow says that the honorary title is not given to military units "in times of peace".

According to Putin's decree, the 11th and 83rd air assault brigades and the 38th communications regiment were honoured for "mass heroism and valour, fortitude and courage" displayed by the units "during armed hostilities to defend the Fatherland and state interests."

The wording appears odd given that Russia -- according to the official line -- is not involved in any military conflicts.

Putin's spokesman Dmitry Peskov denied the awards have anything to do with alleged involvement in Ukraine and said they could relate to earlier missions.

"These units took part in various operations back in Soviet times," Peskov told AFP, noting the troops also included those who served in the volatile Caucasus.

But prominent arms expert Igor Sutyagin claimed the three units fought in eastern Ukraine, adding that he saw the prestigious award as a morale boost for Russia's airborne forces.

"Both of them even suffered losses -- and not small ones," said Sutyagin, who was jailed in Russia for passing information to a UK firm before being handed over to the West in a 2010 spy swap.

In a recent report based on what he called "open sources", Sutyagin claimed that the 11th brigade, which is based in the Siberian city of Ulan-Ude, was one of the Russian regular units that fought in Ukraine in February.

The 83th air assault brigade based in the town of Ussuriisk near Vladivostok on the Pacific took part in the Ukraine fighting "a bit earlier than February", Sutyagin said in emailed comments.

He suggested that the honorary title was given to shore up spirits among the troops.

"This is the basic need to somehow support the airborne troops which have taken very active participation in the events and have sustained significant losses because of that," he said.

Independent political expert Alexander Konovalov said that by handing out the eye-catching awards Putin could be trying to maintain his popularity among the troops despite the public denials that they are fighting.

"They will know that their homeland remembers them," the head of the Strategic Analysis Institute told AFP.

Even those like Igor Korotchenko, the fiercely pro-Kremlin editor of the National Defence magazine who denies Russia's army is in Ukraine, agreed that the "guards" designation was "a sign of acknowledgement for their services."

"This means they performed real tasks."

After first denying it, Putin now admits that he deployed Russian troops during the seizure of Crimea last year but suggestions of the involvement of regular forces elsewhere in Ukraine has been taboo.

Amid a blackout on state television, rights activists collected evidence of unexplained funerals of serving soldiers across Russia and said that conscripts have also been pressured to fight in Ukraine.

Opposition newspaper Novaya Gazeta this month ran a wide-ranging interview with 20-year-old Dorzhi Batomunkuyev, who said he was deployed to Ukraine as part of Ulan-Ude-based tank troops.

Batomunkuyev, who received extensive burns in a February battle with Ukrainian troops, said commanders did not explain anything "because everyone understood everything anyway."

"There were lots of troop trains. Before us there were guys from special operations from Khabarovsk, from various cities, just from the east. One by one, you see? Every day".