March 05, 2015
KIEV, Ukraine -- International observers said Wednesday that fighting between government forces and Russia-backed militants continued to subside but they haven’t been able to verify the withdrawal of heavy weapons from the front lines. 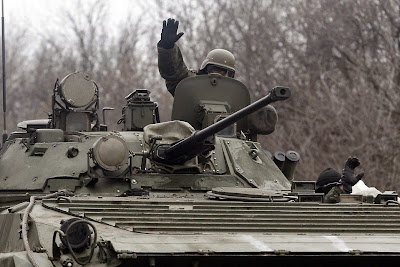 A Ukrainian serviceman waves while riding an armored personnel carriernear the eastern Ukrainian city of Artemivsk in the Donetsk region Wednesday.

The comments came as Germany repeated warnings of further sanctions against Russia if the peace accord agreed to on Feb. 12 isn’t implemented.

The deal has succeeded in calming the region, but scattered fighting has continued and Kiev and the rebels are wrangling over the next steps.

Both sides say they are pulling back weapons as required in the deal.

But the Organization for Security and Cooperation in Europe, which is monitoring compliance, said its observers haven’t been given full access.

Thus, the mission “is not yet in the position to provide verification of withdrawals,” said Michael Bociurkiw, an OSCE spokesman.

He said they also need access to storage sites to verify that the weapons aren't being returned to the conflict zone.

Mr. Bociurkiw said he couldn’t estimate when the withdrawal process may conclude.

“This is apparently a long, complicated process and of course one which needs to happen in good faith,” he said.

The rebels have reported that they had fully withdrawn their heavy weapons from the contact line, a claim Kiev disputes.

Mr. Bociurkiw said cease-fire violations were down, although fighting continued around the rebel-held city of Donetsk and the village of Shyrokyne near the industrial port of Mariupol.

Ukraine reported that one serviceman died in the past 24 hours.

In Brussels, German Chancellor Angela Merkel said the European Union was ready to implement tougher sanctions against Russia if the accord she and French President François Hollande hammered out in Minsk, Belarus, with the leaders of Ukraine and Russia fails.

Speaking after a meeting with European Commission President Jean-Claude Juncker, she said the discussions mostly centered on how to implement the agreement.

But she added: “One thing that is absolutely clear is that if the Minsk accord doesn’t work, member states and the commission are quite prepared to move toward tougher sanctions.”

She said maintaining the territorial integrity of Ukraine was key and could only happen if Ukrainian officials regained control of the frontier with Russia.

Restoring border control is one of the final steps in the Minsk deal, which requires Kiev first to implement constitutional reforms to hand more powers to the rebel-held areas.

Separately, Ukraine has been at odds with Russia over natural-gas deliveries, though Russian President Vladimir Putin said Wednesday that he wanted to avoid a conflict on the subject.

“No one needs the conflicts of earlier years,” Putin was cited as saying by the Interfax news agency.

Two spats between the neighbors in recent years have led to supply cuts to Europe, which receives about half of its Russian gas via Ukraine.

Ukraine has been paying Moscow in advance for natural gas under the terms of a temporary deal that expires at the end of March.

Putin said he ordered the state exporter to deliver only as much gas as Ukraine has paid for, which he said was enough for the next two days.

Ukraine’s foreign-currency reserves also are running low, and the government and parliament have rushed in recent days to pass austerity measures needed to secure a $17.5-billion bailout from the International Monetary Fund.

Finance ministers from the Group of Seven leading economies expressed optimism Wednesday that the loan package will get the green light from the IMF next week.

The G-7 statement said the ministers “look forward to a positive consideration of the Ukrainian program by the IMF Executive Board in the coming days.”