Nemtsov And The Crisis In Ukraine

March 02, 2015
KIEV, Ukraine -- After the shock and grief associated with the sudden murder of Boris Nemtsov, the former Russian deputy Prime Minister under President Boris Yeltsin, speculation grew about who killed him. 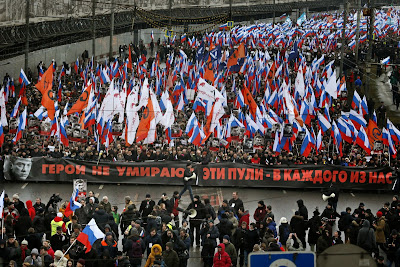 Thousands marched in Nemtsov's memory two days after the opposition leader was killed in front of the Kremlin. Nemtsov had been set to lead a large rally against Putin's war in Ukraine; instead, the demonstration turned into a cortege in his honor.

Some reports linked Nemtsov’s death to his support for Ukraine in its armed conflict with Russia.

For example, in one article Ukrainian President Petro Poroshenko blamed the Kremlin, alleging politicians were afraid of a report Nemtsov was due to share publicly linking Russia to the Ukrainian conflict.

A friend of Nemtsov’s was quoted by the BBC as saying, "For him the conflict between Ukraine and Russia was a real personal tragedy and he was trying to find any way to stop it".

And he was trying to find proof that Putin is sending our troops to Ukraine.

Nemtsov was aware not only of the loss of Russian troops, but also of the staggering humanitarian crisis that is unfolding in Ukraine which was recently described in the following comment made by Ilya Todorovich, a United Nations High Commission for Refugees representative:

Indeed, the war in Ukraine could result in a humanitarian exodus not seen in Eastern Europe since the Hungarian revolution of 1956.

While the Minsk truce brokered by Germany and France is currently holding, many observers still believe Putin will try to establish a land link to Crimea and then push westward, moving ever closer to the eastern border of the EU.

Odessa and pro-Russian Trans-Dneister are two such “strategic points” along the way that could land lock Ukraine, ultimately leading to its demise.

For many Ukrainians, particularly those in the western part ​who led the country in a pro-Western direction​, falling under Russian rule poses a mortal threat.

They will have no choice but to flee.

There is good reason for such people to be alarmed.

Despite the momentary calm, Ukraine’s deputy foreign minister Vadym Prystaiko about a week ago was quoted as saying his country is preparing for “full-scale war”.

In that regard a New York Times piece talking about the Ukrainian loss of the strategic transportation hub of Debaltseve, quoted Valery Y. Shtoba, a rebel soldier saying, “This is a small victory for us. The big victory will come when we drink beer in Lviv,” a vehemently anti-Russian city in western Ukraine, on the Polish border.

While the world takes a breath and honors the life of Boris Nemtsov, the fact of the matter is that Russia is waist deep in the war in Ukraine.

Unlike with Syria where America is arming and training Syrian rebels, President Obama has made it clear the U.S. is not ready to send arms to Ukraine to stop Putin.

Similarly, ​less than a week ago, Canada’s newly appointed Defense Minister said he was not ready to send arms to Ukraine.

All this suggests that if the war flares up again, the humanitarian crisis will only build.

Given the funding the EU has provided Ukraine in the past to block the flow of refugees headed westward, it should not be surprising that the EU is not ready to open its borders to a mass migration of Ukrainian refugees now.

Yet this political hot potato could very well end up in the EU’s hands in the months ahead.

It is here where nations like the United States and Canada can play a positive role.

If the United States ​and Canada are not willing to arm Ukrainians against Russia - - then at least they can ​lead the West in help​ing relieve the humanitarian crisis.

Like the programs adopted by these countries to help evacuate Vietnamese refugees at the end of the Vietnam war, the U.S. and Canada should consider adopting a similar program to deal with the millions of Ukrainians displaced by the war with Russia who may end up in the West.

In the U.S., Temporary Protected Status for Ukrainians is an immediate measure that could be adopted and a similar program could be implemented in Canada​.

Furthermore, as matters escalate, ​a program similar to the one employed in the U.S. and Canada to help Poles escape Soviet repression in the 1970s and 1980s can be introduced.

As the crisis intensifies, it may be necessary for all Western countries to pitch in.

Nemtsov more than many others understood the tragic scope of both the war in Eastern Ukraine and the humanitarian crisis resulting from it.

Unfortunately his leadership is now lost to us.

Though he is no longer with us, we can still heed his warnings and steer the world in a safer, more humanitarian direction.

Implementing such immigration programs is one way we can make a concrete positive contribution to the suffering of people victimized by that war.