Boris Nemtsov Ukraine Report 'To Be Released In April'

March 15, 2015
MOSCOW, Russia -- A report on Russia's role in the Ukraine conflict - compiled by the murdered Russian opposition politician, Boris Nemtsov - will be released in April, his colleague has told the BBC. 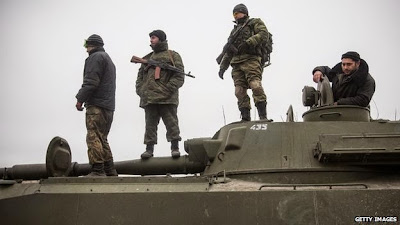 Russia continues to lie and deny actively helping the rebels in eastern Ukraine.

Ilya Yashin said most of the material gathered by Mr Nemtsov had been retrieved, despite police searches of his apartment and offices.

Mr Nemtsov was shot dead on 27 February while walking near the Kremlin.

His allies have said the killing was linked to his criticism of the Kremlin.

Several men from the Caucasus region have been arrested for the murder, prompting suggestions of an Islamist link to the attack.

One of the men charged over the murder has said he was forced into a confession.

Mr Yashin told the BBC that a team of experts had been assembled to complete Mr Nemtsov's report.

He said the team had recovered most of the material gathered by the politician, and was expected to make further reporting trips to complete the work he had planned.

Mr Yashin did not provide any further details about the report.

Mr Nemtsov's computer and documents are said to have been seized by the authorities after his death.

The BBC's Richard Galpin in Moscow says the report is likely to examine the extent of Russian casualties in Ukraine - an extremely sensitive issue.

Several journalists who have investigated the casualties have been attacked.

Ukraine's military has been battling pro-Russian separatist rebels in the country's east.

The Ukrainian government, Western leaders and NATO say there is clear evidence that Russia is helping the rebels with heavy weapons and soldiers.

Moscow denies it, insisting that any Russians serving with the rebels are "volunteers".

Mr Nemtsov was killed days before a march he had been organising against the conflict in Ukraine.

Last year, he contacted the Russian authorities after receiving death threats on his Facebook page, which he linked to his position on the conflict in Ukraine.

Mr Nemtsov's supporters have questioned suggestions of an Islamist link to his killing, arguing that he was not a prominent critic of radical Islam and focused most of his criticism on President Vladimir Putin.

President Putin has condemned the murder and vowed to find the killers.

Unknown said…
Let's compare the numbers:
Quote: "In 2007, the Bush Administration and the Israeli government agreed to a 10-year, $30 billion military aid package for the period from FY2009 to FY2018"
"To date,the United States has provided Israel $121 billion (current, or non-inflation-adjusted, dollars) in bilateral assistance."
Quote: "Between 1946 and 2011, the United States provided Egypt with a total of $71.7 billion in bilateral foreign aid ($118.3 billion in constant 2011 US $). US military assistance levels started ramping up following the 1979 Peace Treaty between Israel and Egypt."
In comparison Ukraine received $120million as of today, it is not a billions as in case of Israel it is millions. Please consider the level of military escalation and prospect of full scale war in the near future.

Mr. Obama looks like a good guy and big friend of Ukraine.

With such level of support there will be no way conflict in Ukraine will stay in Ukraine. War involving rest of Europe is very likely by 2016.

Unknown said…
To avoid big blood in Europe Russian people must change current government, and I understand it is easy said than done.
5:10 PM

Unknown said…
Mikhail Khodorkovsky could be the best leader ever existed in the history of Russia if there is a chance to get him in power. The Question is who such scenario is really need. Russians seams don't understand it and rest of the world not necessary need strong Russia.
But if such scenario does happened Democratic Russia has a great chance to develop. Most likely it will become just another country, and that is not so bad for every one.
12:50 AM