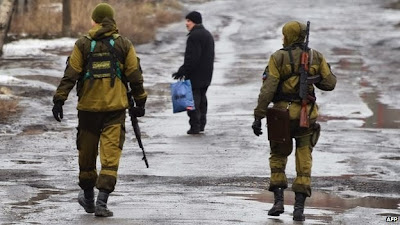 Pro-Russian rebels have been gaining ground.

The rebels want to push government forces out of the eastern regions of Donetsk and Luhansk and are trying to capture the key town of Debaltseve.

Dozens of people including civilians were killed in clashes and artillery fire at the weekend.

Attempts to agree a truce failed when rebel negotiators did not turn up.

A fragile ceasefire agreed in early September in the Belarusian capital, Minsk, collapsed last month when rebels stepped up their offensive on several Ukrainian positions and seized Donetsk airport.

Rebels were accused of carrying out an artillery attack on the south-eastern Ukrainian port city of Mariupol which left 30 civilians dead.

Ukrainian government forces have been blamed for deadly attacks on Donetsk city and other rebel-held areas last month in which dozens of civilians were also killed.

However, the rebels' ability to raise large numbers of forces is unclear.

Zakharchenko's statement could be political bluster or it could be an indication that Russia plans to intervene more seriously in eastern Ukraine, BBC Kiev correspondent David Stern reports.

Ukraine has alleged the rebels are being helped by as many as 9,000 Russian servicemen, a claim the government in Moscow denies.

"It is a reserve force which will definitely be able to resist any attack," he was quoted as saying.

They would have a month's combat training with the aim of providing three motorised brigades for counter-attack, Interfax news agency reports.

Ukraine's government has also announced plans to boost its forces in the east.

Tanks and other heavy military vehicles were seen heading towards Debaltseve on Sunday in an attempt to bolster defences in the town.

Hundreds of civilians were moved out of the town by Ukrainian government forces amid reports that the separatists had reached the outskirts.

A Canadian journalist who is in the conflict zone said the rebels had been involved in a tough battle as they tried to encircle Debaltseve.

"It's been quite surprising to hear how many have said they are experiencing significant losses and many of their fellow fighters have been killed," Kristina Jovanovski told the BBC World Service Newsday programme.

"That's not something that you often hear."

Military officials in Kiev said on Monday that five soldiers had been killed in the past 24 hours, although separatists said the number was more than 20.

The latest fatalities bring to at least 60 the number killed during a weekend of heavy violence in the eastern regions of Donetsk and Luhansk.