Ukraine Cease-Fire Goes Into Effect, But Rebel Leader In Key Town Repudiates Accord

February 15, 2015
ARTEMIVSK, Ukraine -- A fragile, European-brokered cease-fire deal for Ukraine appeared at risk of unraveling, at least in part, when a rebel leader announced Saturday night that he would not be bound by the accord on a central battlefield of the war. 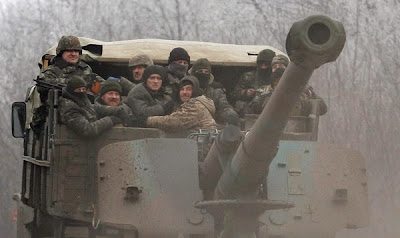 Ukrainian government soldiers outside Debaltseve, the target of an offensive by rebels.

Although the Ukrainian president and the pro-Russian rebel leader both announced that the cease-fire had gone into effect, the separatist leader said it did not apply to Debaltseve, where thousands of Ukrainian troops have been under siege and might be surrounded.

The rebel leader, Aleksandr Zakharchenko, said the town, a critical railway hub, had not been mentioned specifically in the cease-fire agreement.

That deal, which went into effect at midnight, had been brokered by Chancellor Angela Merkel of Germany and the French president, François Hollande, in Minsk, Belarus.

Neither leader immediately commented on Zakharchenko’s announcement about Debaltseve, which had been the scene of intense fighting in recent days as the rebels battled to take the town before any cease-fire.

Just after the midnight deadline, Ukraine’s president, Petro O. Poroshenko, went on national television saying he had ordered Ukraine’s armed forces to halt their fire in the contested eastern portion of the country.

In his earlier statement, Zakharchenko, the head of the self-declared Donetsk People’s Republic, also said he had ordered his forces to halt combat all along the front line in eastern Ukraine, as required in the Minsk agreement, but not near Debaltseve.

He also indicated that rebel forces would not allow the approximately 8,000 Ukrainian troops who are there to leave.

“We will block all attempts to break out,” he said.

“I have given the order.”

The statement left a looming question about the future of the accord brokered Thursday with great effort by the European leaders, including 16 hours of overnight negotiations between Ms. Merkel, Mr. Hollande, President Vladimir V. Putin of Russia and Mr. Poroshenko.

The cease-fire is the second such attempt to end a war that has claimed more than 5,400 lives since it began in April.

Although Mr. Poroshenko said he had ordered the cease-fire, he added that Ukraine would not “turn the other cheek” if the other side violated the agreement, and he spoke bitterly of the two-and-a-half-day gap between the signing of the accord and the implementation of the cease-fire.

“We were ready for an immediate cease-fire in Minsk,” he said.

“But our counterparties asked for 60 hours. We paid a very heavy price for these 60 hours because dozens of Ukrainian citizens, including women and children, were killed.”

Mr. Poroshenko urged the other leaders who had been involved in the talks to now ensure that the rest of the agreement was upheld.

Within hours, reports emerged of possible cease-fire violations, including mortar fire near Debaltseve.

But residents reached by phone in two cities with fighting on their outskirts, Donetsk and Mariupol, said all was calm.

From the cease-fire’s signing on Thursday until Saturday, the Ukrainian military reported 18 soldiers were killed and 63 wounded.

At least four children were among the civilians who died in the recent fighting.

The National Security and Defense Council of Ukraine issued a statement on Saturday evening carried by the Ukrainska Pravda newspaper saying  Zakharchenko’s comments signaled that, “In this way, the Donetsk People’s Republic announces it does not recognize the Minsk accord and will continue military action.”

Mr. Poroshenko said Saturday he would ask the Ukrainian Parliament to declare a national state of martial law if the cease-fire broke down.

Russian-backed militants and Putin have insisted that Debaltseve is surrounded; the Ukrainian government has not conceded that point.

The only Ukrainian resupply road into the town is peppered with mines and in the range of artillery by both sides, and it is unclear who is in control.

Even before Zakharchenko announced the accord did not apply to Debaltseve, anger had been swelling among Ukrainian soldiers at a negotiated lag between the signing of the agreement and its implementation.

Fighting raged through the day on Saturday.

Both sides had tried to land final blows before midnight.

Shells killed two people in the rebel-held city of Donetsk.

Soldiers interviewed at their sandbagged positions along the contested road, as well as ambulance crews and doctors, expressed rising anger over the agreement that led not to a hoped-for calm, but an escalation in fighting.

The poorly guarded, 31-mile supply road into Debaltseve on Saturday was shrouded in an eerie mist and rimmed by bare trees, their limbs prickly with glistening hoarfrost.

Through the day, ambulances rushed to a hospital carrying from the fight the wounded whose luck ran out hours before the accord was intended to take effect.

“The cease-fire was a political decision by my government,” Oksana D. Yarosh, a Ukrainian military surgeon, said in an interview outside the Artemivsk Central Regional hospital, where the most gravely injured are evaluated.

She could not judge the decision to leave open the window for a final frenzy of fighting, she said, because it was unclear what other options existed.

“I am a military doctor,” she said.

“I serve, and my service is trying to save lives and health. Personally, it has been very painful for me to see the boys with shrapnel wounds.”

One of her patients, a 32-year-old soldier, came in Thursday night with severe shrapnel wounds to his face, and his right elbow had been so severely wounded that his arm would probably have to be amputated below the joint, though she refrained from doing so immediately.

“His life will never be the same,” Dr. Yarosh said.

And I think, ‘How scary that we lose people in this way.’ It’s been difficult.”

The United States on Friday said that Russian artillery was aiding the separatists in the battle to encircle the town, site of a strategic railroad switching yard.

On Saturday, the American ambassador to Ukraine, Geoffrey R. Pyatt, posted satellite images on his Twitter account to bolster the case that Russia had joined the separatists.

One image seemed to show four gun lines of towed artillery and one of self-propelled artillery northeast of Debaltseve, in a landscape in snowy towns of gray.

Another showed what Mr. Pyatt said were air-defense systems, and the third showed the black, streaky exhaust plumes of what was labeled a “Russian multiple rocket launcher deployment” near Shakhtar, Ukraine.

A medic reached on Saturday by cellphone in Debaltseve, Albert Sardaryen, a 22-year-old who left his university to volunteer with an ambulance crew, said the city had been attacked by Grad rockets through the night Friday, but that the firing let up around 11 a.m. on Saturday.

Soldiers were hunkered down in basements or bunkers, he said.

The scale of the casualties was unclear, he said, because many of the wounded could not be taken from their front-line positions to his field hospital.

The last ambulance left Debaltseve on Thursday evening, before the escalation that followed the cease-fire signing.

“The situation is quite difficult,” Mr. Sardaryen said.

“We don’t believe in the cease-fire. We are a little bit worried of being trapped. If there is no way out, all we can do is stay and fight here.”