February 16, 2015
BRUSSELS, Belgium -- The European Union imposed an asset freeze and travel ban on 19 people and nine organizations involved in the conflict in Ukraine on Monday, including two Russian deputy defense ministers and Iosif Kobzon, a prominent Russian singer and lawmaker. 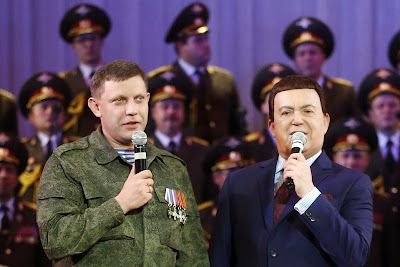 Russian singer and lawmaker Iosif Kobzon (R), and Alexander Zakharchenko, separatist leader of the self-proclaimed Donetsk People's Republic, pictured singing during a concert at a local theater in Donetsk, eastern Ukraine, in October 2014.

EU foreign ministers decided last week to go ahead with the sanctions move, which was a result in the surge of violence in late January in eastern Ukraine.

However the names of the new sanctions targets were only announced on Monday as the sanctions took effect.

The EU sanctions were mainly targeted at separatist officials and organizations but several Russians were also on the list.

They included Russia’s First Deputy Minister for Defense Arkady Bakhin and Deputy Minister of Defense Anatoly Antonov, who the EU accuse of being involved in “supporting the deployment of Russian troops in Ukraine.”

The EU also targeted Kobzon who made a high-profile concert trip to Donetsk to support the rebel leaders there last autumn.

Among the organizations targeted were the armed separatist groups known as Death battalion and the so-called Cossack National Guard.

Russia’s foreign ministry denounced the sanctions as illegitimate and vowed to respond in kind.

In a statement, the ministry said “these decisions look especially absurd against the background of the Minsk agreements.”

The EU has warned it could ratchet up sanctions pressure if the newly announced cease-fire breaks down.

However if violence abates in eastern Ukraine in coming weeks, a debate is expected within the bloc on whether to scale back some of the sanctions, which included broad restrictions on trade and financial links with Russia.

On Thursday, a spokeswoman for the European Commission, the EU’s executive body, said that “the cease-fire is largely holding despite a number of incidents.”

“It’s imperative that the cease-fire is fully implemented…it means that the shooting needs to stop,” said spokeswoman Maja Kocijancic.