January 07, 2015
ARTEMIVSK, Ukraine -- A journalist who spent nearly two years in eastern Ukraine before the war hit has written for Mashable about the stark differences he noticed when he returned to report on the conflict-ridden area. 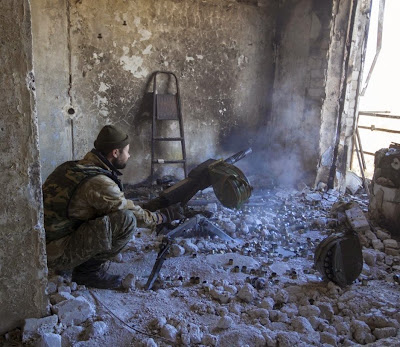 A pro-Russian separatist during fighting near the Sergey Prokofiev International Airport in Donetsk, eastern Ukraine.

Christopher Miller wrote about how he arrived in Artemivsk in 2010 as a Peace Corps volunteer and met many welcoming, hospitable people who were intrigued by life in America.

But by his return last year, the place had completely changed.

He wrote: When I returned in May, it felt like a different country.

Blue-and-yellow Ukrainian flag had been replaced with black, blue and red of the self-proclaimed 'Donetsk People's Republic' and the area suddenly seemed like a more violent, merciless version of itself.

People who had once warmly welcomed me into their homes now shut the door in my face.

'Americans support the neo-Nazis in Kiev!' one former acquaintance shouted at me before spitting at my feet.

A rebel who knew me from Artemivsk — his younger sister had been my student — told me it was fine for me to return.

'But,' he said, his finger resting on a Kalashnikov trigger, 'if I suspect you’re working as a spy, I'll shoot and kill you myself.'

Artemivsk is no longer under rebel control as it once was, but some pro-Russia separatists still populate the area.

Other cities in eastern Ukraine have it worse.

Miller wrote that "to say it looks post-apocalyptic is not a stretch."

He described seeing dead bodies in bombed-out areas, tanks lying upended on the streets, and farmland being destroyed by rockets.

After Ukrainian President Viktor Yanukovych, who had a pro-Russian ideology, was ousted in February amid protests in Ukraine's capital Kiev, the new government that took his place didn't reach out to eastern Ukraine, making many in the region feel slighted, Miller wrote.

This eventually led the region to become a stronghold of pro-Russian separatists.

Russian President Vladimir Putin hasn't admitted that Russia is arming the rebels, but the separatists do have the support of Moscow.

In a December news conference, Putin said Russian soldiers in eastern Ukraine were volunteers and could not be called mercenaries because they were not paid (besides the special forces members who annexed the Ukrainian peninsula of Crimea).

He also blamed Kiev for starting the conflict.

Kiev, meanwhile, says Russia is supporting the separatists and has 10,000 troops on the ground.

Estimates put the number of dead at about 5,000 since fighting broke out between Ukrainian forces and pro-Russian rebels in April.