US Trainers To Deploy To Ukraine

January 24, 2015
WASHINGTON, DC -- American soldiers will deploy to Ukraine this spring to begin training four companies of the Ukrainian National Guard, the head of US Army Europe Lt. Gen Ben Hodges said during his first visit to Kiev on Wednesday. 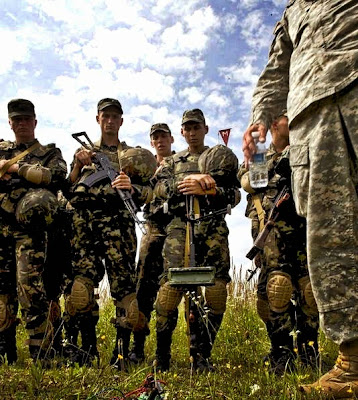 US soldiers train with Ukrainian troops during Exercise Rapid Trident in 2011.

The number of troops heading to the Yavoriv Training Area near the city of L'viv — which is about 40 miles from the Polish border — is still being determined, however.

After meeting with commander of the Ukrainian Armed Forces Lt. Gen. Anatoliy Pushnyakov and acting commander of the National Guard Lt. Gen. Oleksandr Kryvyenko during his visit, Hodges said he was "impressed by the readiness of both military and civil leadership to change and reform."

The training was requested by the Ukrainian government "as they work to reform their police forces and establish their newly formed National Guard," Hillman added.

Funding for the initiative is coming from the congressionally-authorized Global Security Contingency Fund (GSCF), which was requested by the Obama administration in the fiscal 2015 budget to help train and equip the armed forces of allies around the globe.

The training mission has been the subject of plenty of discussion among US policy makers for months, and the United States has already earmarked $19 million to help build the Ukrainian National Guard.

"We're very open to the idea that this becomes a first step in further training for the Ukrainian military," Derek Chollet, former assistant secretary of defense for international security affairs, told Defense News just before he left the Pentagon on Jan. 17.

He was quick to add that he doesn't anticipate that this training mission "will require significant US presence."

The mission comes at a time of increasing concern among Eastern European countries that Russian aggression in the region will increase, and as fighting around the eastern Ukrainian city of Donetsk between government forces and Russian-backed separatist rebels rages on.

Speaking at the Davos conference on Wednesday, Ukrainian President Petro Poroshenko accused Russia of sending 9,000 troops into the eastern part of his country to back the rebels, a contention that NATO officials have backed up, but without providing their own estimates for the number of Russian forces in country.

Chollet said Russian military incursions into the Crimea and eastern Ukraine have refocused American attention on the region after a decade of fighting two wars in the Middle East.

"A year ago we were worried about the future of the trans-Atlantic relationship, how would it be relevant to people," he said.

"And of course, the events of the last year with Russia and Ukraine has focused people again on threats to European security and the unfinished business, really, still coming out of the end of the Cold War."

One of the biggest challenges for US policy makers is trying to discern "where could this lead and how does this make us think anew about European security issues and force posture issues or defense spending issues?" he added.

In addition to US trainers, Washington is beginning to provide heavier military equipment to the government in Kiev.

On Monday, the United States delivered the first prototype of an armored "Kozak" vehicle for use with the Ukrainian border guard, according to the US Embassy there.

A posting on a US government contracting site put the cost of the vehicle at $189,000.

The vehicle is built on a chassis manufactured by Italian company Iveco and features a V-shaped armored hull to help protect against mines and roadside bombs.

The embassy said that to date, "the United States has delivered dozens of armored pickup trucks and vans to the Ukrainian Border Guard Service.

The Kozak is larger and offers a higher level of protection."