January 25, 2015
MARIUPOL, Ukraine -- The rocket attacks on Saturday on public places in Ukraine city of Mariupol that killed 30 people drew rebuke from Secretary of State John Kerry and other world leaders who says the strikes were executed by Russian-backed separatists. 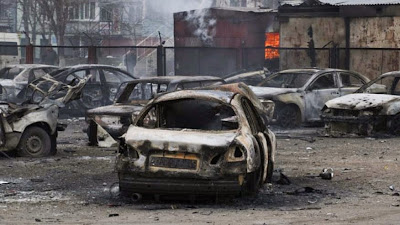 Jan. 24, 2015: Burned cars on a destroyed parking site in a residential area in Mariupol, Ukraine.

“I join my European counterparts in condemning in the strongest terms today's horrific assault by Russia-backed separatists on civilian neighborhoods,” Kerry said.

He also suggests more international economic sanctions on Russian if Moscow continues to arm and finance the separatist, or anti-government forces, in Ukraine, in violation of a peace deal between the countries reached last year.

“We call on Russia to end its support for separatists immediately, close the international border with Ukraine and withdraw all weapons, fighters and financial backing,” Kerry also said in a statement.

“Otherwise, U.S. and international pressure on Russia and its proxies will only increase.”

On Saturday, rocket fire slammed into a market, two schools and homes in the eastern Ukrainian city of Mariupol, about 25 kilometers (16 miles) outside of the ceasefire line.

Ukraine's president called an emergency meeting of his military officials and cut short a trip to Saudi Arabia to rush back to coordinate the government's response.

The rocket attacks came a day after the rebels rejected a peace deal and announced they were going on a multi-prong offensive against the government in Kiev to vastly increase their territory.

The rebel stance has upended European attempts to mediate an end to the fighting in eastern Ukraine, which the U.N. says has killed nearly 5,100 people since April.

Mariupol, which lies on the Azov Sea, is the major city between mainland Russia and the Russia-annexed Crimean Peninsula.

Heavy fighting in the region in the fall raised fears that Russian-backed separatist forces would try to take over the government-held city to establish a land link between Russia and Crimea.

He spoke as he laid a wreath where at least eight civilians died when a bus stop was shelled in Donetsk, the largest rebel-held city in eastern Ukraine.

"The area that came under attack was massive," Mariupol mayor Yuriy Khotlubei said.

"The shelling was carried out by militants. This is very clearly Russian aggression that has caused terrible losses for the residents of the eastern part of our city."

By the evening, Khotlubei said the death toll had risen to 29.

There was no immediate report of how many people died in each location.

A Ukrainian military checkpoint on a road out of the city toward rebel-held areas was also hit and one serviceman was killed, the Defense Ministry said.

Mariupol city council urged residents not to panic and to ignore rumors that Ukrainian armed forces were planning to withdraw.

"On the contrary, all units are on fully battle-ready. Security measures in the city have been strengthened," the council said in a statement, adding that no armed separatist units had been seen moving toward the city.

Clashes were also taking place across the eastern regions of Donetsk and Luhansk, where a separatist insurgency emerged in April.

Fighting has also been intensifying recently for the government-held town of Debaltseve, 50 kilometers (31 miles) east of Donetsk.

Main roads into the town are under separatist control and it's feared the Ukrainian forces stationed there could soon be fully surrounded.

Responding to the attack upon Mariupol, EU foreign affairs chief Federica Mogherini urged Russia to use its influence over the separatist leaders to halt their offensive and to desist from providing military and financial support.

Russia insists it does not support the rebels, but Western military officials say the sheer number of heavy weapons under rebel control belies that claim.

A peace deal signed in September in the Belarusian capital of Minsk envisaged a cease-fire and a pullout of heavy weapons from a division line in eastern Ukraine.

It has been repeatedly violated by both sides, and heavy artillery and rocket barrages have increased the civilian death toll in the last few weeks.

The foreign ministers from Russia, Ukraine, France and Germany agreed Wednesday to revive that division line, but fighting has continued unabated.

On Thursday, mortars rained down on Donetsk, hitting a bus and killing several bystanders.

Rebel officials said 13 were killed in that attack.

Monitors from the Organization for Security and Cooperation in Europe cited city morgue officials as saying eight bodies were received.

On Jan. 13, a bus parked near an army checkpoint north of Mariupol was hit by a shell, killing 13 people.

The OSCE's special monitoring mission in eastern Ukraine on Saturday condemned the growing number of civilian casualties and called for restraint from all sides.