Ukrainian Troops Say They Retake Most Of Donetsk Airport From Rebels

January 18, 2015
DONETSK, Ukraine -- Ukrainian troops launched a "mass operation" overnight, retaking almost all the territory of Donetsk airport in eastern Ukraine lost to separatists in recent weeks, even as thousands gathered in Kiev for a state-sponsored peace march on Sunday. 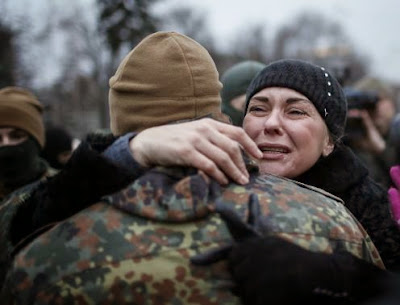 A relative of new volunteer for the Ukrainian Interior Ministry's Azov battalion reacts before volunteers depart to the frontlines in eastern Ukraine, in central Kiev January 17, 2015.

The army's offensive at the airport brought the fighting close to the big industrial city of Donetsk itself, centre of a pro-Russian separatist rebellion.

Residents reported intensified outgoing shelling including from residential areas in central parts of the separatist-held city.

With attempts to restart peace talks stalled, pro-Russian rebels have stepped up attacks in the past week and casualties have mounted, including the deaths of 13 civilians in an attack on a passenger bus, which Kiev has blamed on the separatists.

The separatists had gained control of new areas of the airport and retaking much of this territory was a symbolic victory for Kiev, whom rebels have accused of escalating the conflict.

"The decision was taken for a mass operation ... We succeeded in almost completely cleaning the territory of the airport, which belongs to the territory of Ukrainian forces as marked by military separation lines," military spokesman Colonel Andriy Lysenko said in a televised briefing.

Lysenko said the operation had returned the battle lines near the airport to the previous status quo and that the Ukrainian army had thus not violated the Minsk 12-point peace plan agreed with Russia and separatist leaders last September.

President Petro Poroshenko underlined the need to fight for Ukraine's territorial integrity, as he addressed a crowd of several thousand gathered for a peace march in memory of those killed on the passenger bus.

"We will not give away one scrap of Ukrainian land. We will get back the Donbass ... and show that a very important aspect of our victory is our unity," he said.

In Kiev, the army defenders of the airport are known by the science-fiction nickname of 'cyborgs' in tribute to what is perceived as their super-human valour.

"Just this past night our 'cyborgs' at Donetsk airport demonstrated their courage, patriotism, heroism, as a model for how our country must be defended," Poroshenko said.

A ceasefire agreed at the talks in Minsk, capital of Belarus, in early September has been regularly violated from the start by both sides, and hopes of de-escalation have diminished in recent days as violence flared after plans for peace talks last week were abandoned.

In Donetsk, residents reported a sharp intensification of fighting.

"It was impossible to sleep - explosions, the walls were shaking. It seemed like they were firing from near the building ... The DNR (rebel) army were firing from our district," 53-year-old advertising executive Alla said by telephone.

Forty-year-old plumber Andrey Tkachenko, who lives in southern district of Donetsk, said the shelling had become noticeably worse in the past 24 hours.

"By now we are able to tell from the sound what's flying.

We're used to the GRAD missiles, but now something stronger is firing all night and all day," he said.

The World Health Organisation says more than 4,800 people have been killed in the conflict pitting Kiev's forces against separatists whom the West say are supported and armed by Russia.

Despite what Kiev and the West says is incontrovertible proof, Russia denies its troops are involved or that it is funnelling military equipment to the separatists.

With its runways pitted and cratered, the airport itself, with a multi-storey control tower and extensive outbuildings, has long since ceased to function.

But its hulk, battered by shelling and gunfire, has taken on symbolic value for both sides with government soldiers and separatists hunting each other often at close range in a deadly cat-and-mouse game among the ruins.