Ukraine Separatists To Press On With Offensive: Interfax

January 23, 2015
DONETSK, Ukraine -- Pro-Russian separatists will press on with a military offensive in east Ukraine and will not initiate ceasefire talks with the Ukrainian authorities, their leader was quoted as saying on Friday. 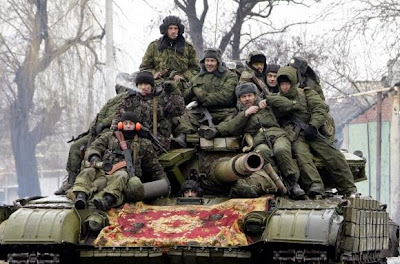 Members of the armed forces of the separatist self-proclaimed Donetsk People's Republic drive a tank on the outskirts of Donetsk January 22, 2015.

Alexander Zakharchenko, head of the self-proclaimed Donetsk People's Republic in east Ukraine, made clear the rebels were in no mood to compromise after making territorial gains in recent weeks.

"There will be no attempts to speak about a ceasefire on our part," Russia's Interfax news agency quoted him as saying at a meeting with students in Donetsk.

A ceasefire between government forces and the separatists was agreed last September but has failed to take hold, with each side accusing the other of violating it and fighting increasing this month.

"We will carry on our offensive up to the borders of the Donetsk region and if I see a threat coming from other sides it [the threat] will be eliminated," Zakharchenko said.

"They've said before that they want to take (the cities of) Mariupol, Slaviansk and Kramatorsk. This is just another declaration - let them talk," he said by telephone.

The diplomatic standoff over the conflict in Ukraine has pushed relations between Russia and the West to their lowest level since the Cold War ended.

First Deputy Prime Minister Igor Shuvalov defended Russia's position at the World Economic Forum in the Swiss resort of Davos, warning that Ukraine could be a "bleeding wound for decades" if the West kept telling Russia "to go onto a corner and sit there quietly."