Ukraine Separatists Claim Victory In Battle For Airport In Donetsk, Their Stronghold City

January 16, 2015
DONETSK, Ukraine -- Russian-backed separatists announced Thursday they had captured the shattered remains of the Donetsk airport terminal in eastern Ukraine and plan to claw back more territory, further dashing hopes for a lasting peace agreement. 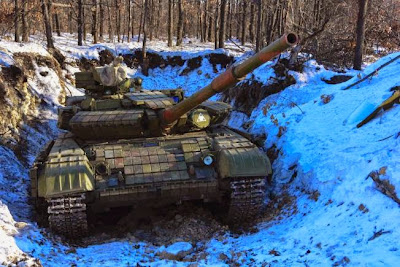 In this Wednesday, Jan. 14, 2015 photo Russian-backed separatist's tank is placed in a fortified position at the check-point north of Luhansk, Eastern Ukraine. An attack on a passenger bus in eastern Ukraine killed 12 people Tuesday, likely dealing the final blow to hopes that a short-lived and shaky cease-fire could take hold.

The airport, on the fringes of the rebel stronghold of Donetsk, has been at the center of bitter battles since May.

Control over it was split between the separatists and Ukrainian forces who had held onto the main civilian terminal.

Reduced to little more than a shell-littered wreck, the building is of limited strategic importance but has great symbolic value.

An AP reporter saw a rebel flag hoisted over that building Thursday, although fighting still appeared to be ongoing.

Ukraine insisted government troops were holding their positions at the airport.

Alexander Hug, deputy head of an Organization for Security and Cooperation in Europe monitoring mission to Ukraine, said rebel forces carried out artillery attacks from within residential areas.

"These attacks ... attract counter-fire from positions opposite and other directions, which leads unfortunately to repeated civilian casualties and damage for infrastructure," Hug said.

The rebel leader in Donetsk, Alexander Zakharchenko, said the separatist offensive would continue and its goal was to recapture all territory lost to government forces last year.

"Let our countrymen hear this: We will not just give up our land. We will either take it back peacefully, or like that," Zakharchenko said, nodding his head toward the sound of explosions coming from the direction of the airport.

If the separatists do advance further, that would undermine the chances of resurrecting a September cease-fire that laid out specific demarcation lines between the opposing sides.

The rebels' disregard of that agreement appears to defy Moscow's public backing of the peace deal.

The likelihood of any further negotiations looks compromised against the backdrop of continued unrest.

Separatist leaders in the regions of Donetsk and Luhansk have declined to attend talks with Ukraine and Russia expected to take place Friday in the capital of Belarus, Minsk.

They have instead dispatched envoys and said they refuse to take part in more talks unless specific results are achieved.

The battle for Donetsk airport took place as Ukraine held a day of mourning for 13 people killed Tuesday when their bus was hit by what the government says was a rebel shell.

President Petro Poroshenko said respects would be paid for all people killed by rebel offensives.

The separatists deny responsibility for the deaths and accuse Ukrainian forces of staging an attack in a bid to smear them.

OSCE observers said the bus showed "damage consistent with a nearby rocket impact."

Ukraine and the West have routinely accused Russia of fomenting unrest in the eastern Ukraine.

Moscow denies that accusation, although it admits that Russian citizens, including soldiers, are involved in the fighting in Ukraine.

In Kiev, the Ukrainian parliament on Thursday approved a presidential decree for three waves of military mobilization this year.

Poroshenko said that was motivated by the worsening security situation.

Unknown said…
Everything the terrorists say has to be taken with a very big grain of salt. As of Friday the Airport appears to be in Ukrainian hands. What the terrorists may have in mind is that they demolished the very shaky control tower at the airport......what took them so long?
9:55 AM

Unknown said…
It is now early Saturday in Ukraine and Donetsk Airport is still in Ukrainian hands.

As I noted in my comment above, it "äin't" over till its over and the terrorists are simply not to be believed......after all, the acorn does not fall far from its (Russian) tree.
8:26 PM

Unknown said…
It is now early Sunday in Ukraine and Ukrainian forces have not only beaten back a ferocious terrorist assault, but, in fact, cleared a path to the terminal, have resupplied the troops, and removed the wounded.

Do you suppose that the terrorists may have mistaken Donetsk airport for Luhansk airport?