January 09, 2015
KIEV, Ukraine -- Ukrainian military officials said Friday that four soldiers were killed in one day as separatists intensified shelling of government positions ahead of peace talks expected in the coming week. 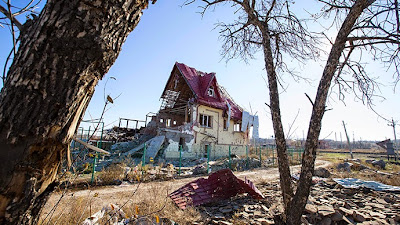 A house damaged by recent shelling is seen in a village in eastern Ukraine.

The press office for military operations in eastern Ukraine said army outposts were targeted 50 times by small arms fire, mortars and rockets over the last day.

Intensification in hostilities comes one month after a renewed truce led to a marked lull in the fighting that broke out in the spring.

An AP reporter heard rockets being fired Thursday evening into the separatist stronghold of Donetsk, an indication that government forces are also likely breaching the cease-fire.

Separatist authorities in Donetsk said Friday that a hospital building was struck by artillery fire earlier in the week, but that there were no casualties.

Leaders of Ukraine, Russia, Germany and France are expected to meet Thursday in Kazakhstan to consider solutions to the conflict.

The talks, not yet confirmed, will be seen as an attempt by Moscow to seek a softening of EU sanctions imposed last year in response to its annexation of Crimea and its perceived material support of separatist forces in Ukraine.

In a signal of possible softening of positions in Brussels, EU foreign policy chief Federica Mogherini said Thursday that there are "some limited positive signs on the Russian side."

On the ground in the Ukraine's Donetsk and Luhansk regions, there have been indications of mounting tensions in recent days.

Ukrainian military press spokesmen have reported an uptick in shelling by separatists and the resumption in the use of Grad and Uragan multiple rocket launchers.

An AP reporter heard outgoing mortars being fired Friday morning from a rebel-controlled area situated around one kilometer (3,300 feet) from an orphanage that was supposed to be receiving a visit from the Donetsk separatist leader, until it was canceled.