January 20, 2015
KIEV, Ukraine -- Rebels and Russian troops in Ukraine’s east are carrying out new offensives, the government in Kiev said, a day after it accused Russia of sending about 800 soldiers across its border. 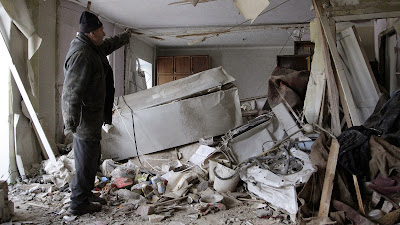 A Ukrainian man shows his building which was damaged during clashes between Ukrainian security forces and pro-Russian separatists in Donetsk, Ukraine, on Jan. 15, 2015.

Russia is also “executing terrorist acts” on Ukrainian territory and engaging in “sabotage against peaceful civilians,” the National Security and Defense Council in Kiev said on its website late Monday, following a blast in the eastern city of Kharkiv that wounded 13 people.

“The enemy is carrying out an active regrouping and bolstering its forces near the Donetsk airport and in the Luhansk region.”

The fighting between the government and rebels has intensified since a push to restart peace talks collapsed last week.

Scores of Ukrainian soldiers have been killed and wounded in the battle for the airport, and both sides accuse each other of reinforcing their positions in breach of a Sept. 5 truce signed in Minsk, Belarus.

Putin denies any military involvement in Ukraine and has said that any Russians fighting there are volunteers on holiday.

“There is unquestionable proof that the Russian Federation has supplied men and equipment” to the rebels, Prime Minister Arseniy Yatsenyuk said on Monday at meeting with his Polish counterpart in Kiev.

Ukraine began a first phase of drafting as many as 50,000 enlistees on Tuesday to bolster troop numbers.

The mobilized soldiers will receive 25 days of training before receiving assignments, the Defense Ministry said in December.

About another 54,000 may be called up starting in April if necessary, Defense Minister Stepan Poltorak said Jan. 8.

The United Nations estimates that more than 4,800 people have died in the nine-month conflict, which has poisoned ties between Russia and its former Cold War foes.

With the nature of the fighting making it difficult to independently verify the claims made by either side, the government in Kiev has exchanged blame with the rebels and Russia for shelling that has killed civilians.

The two sides have also disputed who is in control of Donetsk airport, casualty numbers, troop movements and other issues.

At the airport, government troops and rebels are fighting pitched battles in arrivals and departure halls that once featured restaurants and shops, transforming the terminals refurbished for the 2012 Euro Championship soccer tournament into smoking ruins.

Separatists blew up part of a ceiling in the main terminal on Monday, causing “many injured” among government troops, Ukrainian presidential adviser Yuriy Biryukov said on Facebook, without giving details.

Nineteen Ukrainian soldiers were wounded in fighting from Monday to Tuesday, Lysenko said.

The explosion in Kharkiv was near a district court, Anton Herashchenko, an adviser to Interior Minister Arsen Avakov, said on Facebook on Monday.

The blast followed explosions in Odessa, on the Black Sea coast, and a fire that engulfed a rail tank car carrying gasoline in Kharkiv region.

In addition, nine cars were damaged by an explosion in a residential area in Kiev.

“Russia is continuing its war against Ukraine, and active terrorist activity on our territory is one of components of this war,” the Security Council said in the statement.

Rebels shelled Ukrainian forces stationed near residential areas close to the airport overnight, the Security Council said in the statement, with the government troops firing back.

Russia’s ruble, undercut by a more than 50 percent decline in oil prices since a peak last year and U.S. and European Union sanctions for Putin’s March annexation of Crimea from Ukraine, fell less than 0.1 percent against the dollar to 64.97 at 3:10 p.m. in Moscow.

After dropping more than 40 percent versus the greenback last year, the ruble has lost 6.8 percent in 2015, making it the world’s third worst-performing currency.

Ukraine’s hryvnia was little changed at 15.85.

Both sides say their offers for a cease-fire have been rejected.

Ukraine is ready for a cease-fire if it gets guarantees from Russia that it will be “bilateral, not unilateral,” Poroshenko said in an in interview with newspaper Le Monde published on Tuesday.

While Russia accused Poroshenko of rejecting a truce offer on Monday, Poroshenko said the offer to withdraw artillery didn’t clarify to what line the pullback would take place.

Ukraine and its allies in the U.S. and EU say Russia isn’t meeting the terms of the September Minsk truce, including closing the border, withdrawing troops and weapons and using its influence on the insurgents to halt hostilities.

Russia accuses the government in Kiev of reinforcing its positions and firing on civilians.

EU governments opted on Monday to maintain economic sanctions on Russia as long as the conflict continues.