January 03, 2015
DONETSK, Ukraine -- Militia rebels in Ukraine are reportedly recruiting child soldiers for the frontline fight against troops, as columns of Russian military — including hundreds of tanks — cross the border into the embattled east of the country for what is feared will be a major offensive. 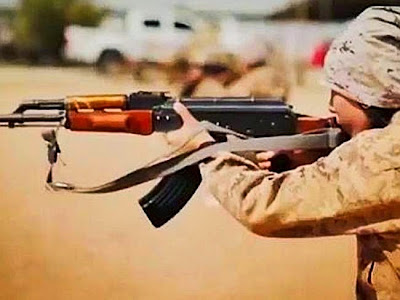 Any notion the start of the new year could lead to a truce in the war were dashed yesterday with the Ukraine government accusing the rebels of recruiting 16-year-old local boys.

The enlistments were specifically of able-bodied teenagers aged 16 to 18 from the territories of Donetsk and Luhansk.

“Engaging minors into combat actions and military service is a blatant violation of international humanitarian law, and of the Article 38 of the UN Convention on the Rights of the Child in particular,” Col Lysenko said.

He said while it was the local militia doing the recruiting the leadership of the militia appeared to be in the midst of being taken over by Russian military commanders and troops.

“According to intelligence data local militants are being replaced with regular military of the Russian Federation Armed Forces in an attempt to subordinate all illegal armed groups to the unified command centre,” he said.

There has been constant sporadic fighting in the east of the region but Ukraine military has noted a significant build-up of Russian troops and hardware crossing the border suggesting a major offensive.

Between October 30 and December 9 Ukraine military monitored hundreds of movements from Russia across the porous unguarded border with Ukraine including 256 tanks, 402 armoured personnel carriers, 35 self-propelled artillery, 138 Grad missile systems, 1903 trucks of munitions and personnel, 242 fuel tankers and five BUK missile systems like the one largely suspected of having shot down MH17.

Unknown said…
During the seige of Berlin, youngsters as young as 11 and 12 were "recruited" to defend the city.

Today, throughout much of North Africa savage cretins have been attacking villages and kidnapping children as young as 9-10 to engage in atrocities and mayhem.

It would seem that the old adage "birds of a feather flock together" is still true.
11:17 AM