January 21, 2015
ZURICH, Switzerland -- Ukrainian President Petro Poroshenko said he’s still hopeful talks with Russia will bring an end to fighting with pro-Moscow separatists in the east of his country, despite the recent upsurge in violence there. 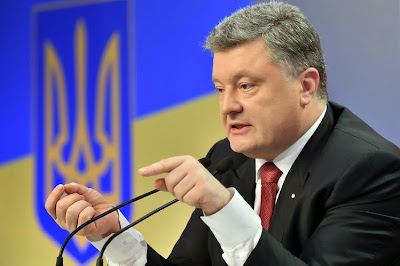 In an interview with a small group of reporters, he said that Western sanctions are succeeding in keeping Russia at the negotiating table, even as he accused the Kremlin of sending more than 1,000 troops across the border in recent days, bringing the total on his territory to about 9,000.

He didn't offer any specific evidence of the move.

Though Ukraine has for now fought the rebels to a standstill, he said, a military solution to the conflict that has claimed almost 5,000 lives “does not exist.”

He said support from Europe and the U.S. is crucial to cementing a peace deal agreed upon in the Belarus capital of Minsk in September, and that sanctions are forcing Russia to take talks seriously.

“The most important thing is that sanctions are working,” he said, adding that they are “not just bringing some problems to Russia, but an instrument to keep it at the negotiating table.”

Mr. Poroshenko said he speaks to Russian President Vladimir Putin about once every two weeks.

Asked if the fall in oil prices and the ruble’s value in recent months had changed Putin’s tone in the calls, Mr. Poroshenko said no.

“It seems to me that the Ukrainian question is very emotional for him,” he said.

“If you ask if I trust him, my answer would be no.”

“To have a complete de-escalation, we don’t need any blah-blah-blah. We need just to withdraw Russian troops,” Mr. Poroshenko said.

Mr. Poroshenko also said that a resolution to the conflict is “a separate issue” from the fate of Crimea, the Ukrainian peninsula that Moscow annexed in March.

While Moscow’s public support of the separatists in the east has appeared to wane in recent months, the Kremlin remains steadfast that it won’t give up Crimea.

The Ukrainian leader appeared to bend toward the position of Western leaders who have denounced the annexation, but have privately acknowledged it could take years to get it back.

“The return of Crimea is not a question of one month, or several months or even a year,” Mr. Poroshenko said, adding that he could only address the problem after getting Russia to withdraw from eastern Ukraine first.

Ukraine had seen a lull in fighting during the Christmas and New Year’s holidays.

But during the past few days Kiev and the rebels have been engaged in heavy fighting for the airport outside the eastern city of Donetsk.

Both sides are now accusing the other of breaking the peace.

Though the Minsk agreement calls for both sides to withdraw heavy weaponry, neither one has.

He warned Kiev that attempting to resolve the conflict by force would be a “strategic mistake” that “could lead to irreversible consequences for Ukrainian statehood.”

“The priority now is to prevent a further intensification of the military conflict and a renewed political escalation between Kiev and Moscow,” German Foreign Minister Frank-Walter Steinmeier said.

“This is worth every effort.”

A sticking point in previous talks has been agreeing upon a line dividing warring parties, because both sides fear it could turn into a de facto border if a peace agreement holds.

Both sides have traded peace proposals since September, and on Sunday Putin’s press secretary said the Russian president had proposed another plan in a letter to Mr. Poroshenko last week.

The letter proposed a halt to artillery exchanges and the rapid withdrawal of heavy weapons by both sides.

The Kremlin said that Mr. Poroshenko rejected the plan.

Ukraine’s foreign minister said Tuesday that Moscow was calling for a deal that ratifies the current front line, which Kiev says includes about 500 square kilometers (193 square miles) of territory taken by the rebels since the Minsk deal.

Kiev wants to go back to the original September line, he said.

Mr. Poroshenko said that Putin’s latest proposal wasn't adequate to secure a cease-fire, but was still a “sign from Russia that they are ready to [put] pressure on these terrorists and to push them” to sign a road map to the Minsk agreement.

“We [are] immediately ready to declare the cease-fire. We just need a guarantee from Russia that this would be bilateral, not unilateral,” Mr. Poroshenko said.

He added that a permanent peace deal was necessary, in that “a cease-fire is not enough because it would be broken in two or three days.”

An end to artillery duels would be a first step, Mr. Poroshenko said.

Negotiators hope that the conflict would then gradually wind down.

Ukraine would like a peace deal because “war is very expensive,” he said.

Ukraine has a $17 billion loan program through the IMF, and is expected to ask for as much as $15 billion more.

Mr. Poroshenko declined to say how much extra financial assistance Kiev needs over the next two years, but said he was confident that the aid would come.

“I don’t feel any fatigue from our Western partners,” he said.