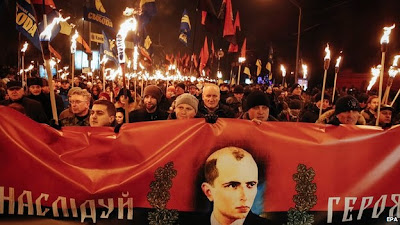 A hero to Ukrainians, Bandera is a hate figure for many Russians.

At the rally far-right leader Oleh Tyahnybok, who heads the Svoboda party, urged the authorities to return "Hero of Ukraine" status to Bandera.

Russia says it supports separatists in eastern Ukraine because of a neo-Nazi threat to ethnic Russians.

Marchers carried the nationalist flags of Svoboda and the Right Sector - both movements that helped to topple ex-President Viktor Yanukovych, who was an ally of Moscow, last February.

Turnout at the rally was estimated at 2,500.

Russia says some Russian TV journalists were assaulted at the Kiev march.

Two women reporters with the pro-Kremlin TV channel LifeNews were "attacked" by masked assailants, who smashed their camera and stole a mobile phone, the Russian foreign ministry said.

"This is the latest glaring instance of the media being persecuted in Ukraine for doing their job," ministry spokeswoman Maria Zakharova said.

A man has been arrested in connection with the incident, Ukraine's Unian news agency reports.

Bandera is a controversial figure in Ukraine.

His "hero" status was revoked by Yanukovych.

Despite leading anti-Soviet resistance fighters, Bandera was arrested and jailed by the Nazis during the war.

He was assassinated by a Soviet KGB agent in Munich in 1959.

Unknown said…
To the British, the fighters and founders of the Irish Republic were "terrorists". To the Palestinian Arabs the fighters and founders of Israel were also terrorists.To the American Indian the Europeans were occupiers and oppressors. To the Confederate states of America the northerners were invaders and the northern scorched earth policy in Virginia and Georgia was genocidal (some still call it the "war for independence" rather than "civil war".) And, I can't help thinking that - even in the Old Testament - those occasions in which indigenous peoples and tribes were pushed out (often in a very bloody fashion) to make way for God's chosen people - were viewed as less than divinely inspired by those whose ox was gored.

The point is very simple. Bandera represents a militant form of Ukrainian nationalism which sought to free Ukraine of foreign rule and oppression. He and his movement briefly sided with the Nazis on the assumption that "my enemy's enemy is my friend". That turned out to be a wrong assumption and Bandera ended up in a Nazi concentration camp for the remainder of the war. But his party continued the fight ...against both the Nazis and the Soviets. German archives disclose the extent of difficulty that his forces and that of the Ukrainian Partisan Army caused the Germans for the remainder of the war.

After the war, Russia had free play - for almost a half century - to delude Ukrainians into believing that Bandera was the devil incarnate. Neither Bandera nor his followers were provided the opportunity to offer their side of the story. Ergo.....he is "controversial" to all those Ukrainians (other in Western Ukraine) who know him and his movement only from the fiction provided by a very fiction-prone regime.

That is changing and will change even more as historians and archivists provide a more sober and honest view of Bandera, his movement and both their virtues and their sins.

Until then we can anticipate that Russia and its wonderfully efficient propaganda machine will try to squeeze out whatever last remaining ounces of scandal they can pin on the man.

Scrat335 said…
Tell that to all those Polish villagers that were murdered. You can butter bullshit all day, it's still buttered bullshit when the sun goes down.
10:21 AM

Unknown said…
Yes...you are absolutely right about the Poles. It was a tragedy and a stain on Ukraine's liberation movement for Bandera's people to have massacred so many innocent Poles, especially in Volhyn. It may have also been - in part - a reaction to the immediately preceding brutal "pacification" policy Poland instituted against Ukrainians.

But evil is never the answer to evil. By all indications, both the Poles and the Ukrainians have turned the page in their dealing with each other and will now work together - as the slavic cousins they truly are - to stand up against a common foe that had subordinated both of them.

Since you appear to be in a bad mood because you have not had your breakfast yet, let me interpret my comments. I did not praise nor did I condemn Bandera or his movement. I simply pointed out that he is "controversial" to many Ukrainians because the only information they have ever had of him has been entirely one-sided. I also pointed out that, once honest historians have had the opportunity to provide a more realistic and balanced view than the one offered by the KGB, then he may turn out to be less "controversial" - at least to Ukrainians if not to Russians.

The truth is an incredibly powerful liberating tool.
11:04 AM