January 06, 2015
KIEV, Ukraine -- At least 12 servicemen in eastern Ukraine were killed and more than 20 injured when military trucks collided with their bus in bad weather, police and local media say. 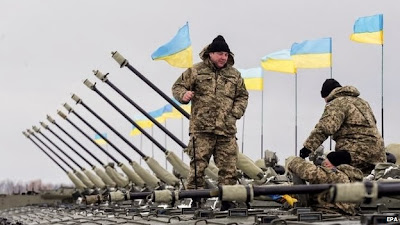 Ukrainian troops have been fighting rebels in the east since early last year.

They said the accident happened late on Monday in an area where the army is fighting pro-Russian separatists.

Authorities have urgently appealed for blood donations to treat the wounded.

Local media reports said that those killed in the bus crash were members of the National Guard.

"During a rotation of volunteers and servicemen in the area of anti-terrorist operations on January 5, military trucks and a bus collided in bad weather conditions," a police statement said.

No other details of the accident were released.

Sporadic shelling between Ukrainian forces and separatists in the east has been reported despite a ceasefire.

Ukraine and the West accuse Russia of sending heavy weapons and troops to help separatists in eastern Ukraine following the overthrow of pro-Russian President Viktor Yanukovych in February 2014.

Nearly 5,000 people have been killed in the conflict, which has also led to a deterioration in relations between Russia and the West.

Russia admits that "volunteers" have gone to the east, but denies boosting the rebel ranks with regular troops and hi-tech equipment.

It accuses the Ukrainian government of indiscriminate shooting in a "punitive" military campaign there.

Unknown said…
I'm very happy with how a thorough car attorney has been. They have been understanding of the entire situation and very knowledgeable with dealing with my family. The same day I called them a doctor called me to take immediate care of my needs.injury attorney in LM
6:22 AM

Unknown said…
This comment has been removed by a blog administrator.
6:20 AM