January 16, 2015
KIEV, Ukraine -- Ukraine lurched back toward full-scale conflict as government troops repelled an assault by pro-Russian insurgents for control of an eastern airport. 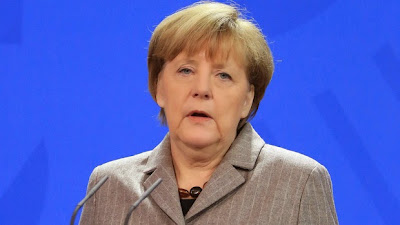 Germany's Chancellor Angela Merkel urged a meeting in the Belarusian capital to set a demarcation line between the two sides Ukraine and Russia.

Ukrainian servicemen were holding their positions at the Donetsk airport, which has been mostly destroyed since a revamp that ended in 2012, as of 7 a.m. today, the military’s press office said on Facebook.

Ukraine said yesterday that cease-fire violations had surged to a record, while the nation’s security council warned the unrest may spark a “continental war” and German Chancellor Angela Merkel called for emergency talks.

The upsurge in violence recalls the peak of the nine-month conflict, which has killed almost 5,000 people and poisoned Russia’s ties with its former Cold War foes.

Hope faded for talks slated for today in Belarus while the fate of a peace summit in Kazakhstan is uncertain.

Russia raised the pressure, saying it may demand early payment of a $3 billion bond.

“The increased fighting in recent days most likely does not represent a major and broad offensive by the separatists, though they do appear intent on taking Donetsk’s airport,” Eurasia Group Chairman Cliff Kupchan said in an e-mailed note.

“Russia/the separatists likely want the airport to improve their leverage over Kiev and in on-and-off diplomatic talks.”

Russia rejects accusations by Ukraine, the U.S., the European Union and NATO that it’s meddling in the conflict by sending troops and weapons.

Foreign Minister Sergei Lavrov warned Ukraine Jan. 14 against efforts “to resort once again to force” amid truce breaches “on a mass and regular scale.”

The separatists used artillery and rockets near Donetsk airport at around midnight, with government troops were attacked 82 times in the past 24 hours, the military said.

The Organization for Security and Cooperation in Europe said yesterday that shelling, counter-shelling and small-arms fire prevented its monitors from reaching the airport for a second day.

It condemned fighting in residential areas nearby, which “inevitably results in civilian deaths and injuries.”

Thirteen civilians were killed three days ago when the bus they were traveling on was caught in fire.

The military blames a separatist missile; the rebels say the vehicle drove onto a mine laid by the army.

As the violence escalates, lawmakers in Kiev yesterday backed a partial mobilization for next week.

The hryvnia, the worst-performing currency during the past year, weakened 0.7 percent against the dollar, data compiled by Bloomberg showed.

A meeting with representatives of Ukraine, Russia and the OSCE had been planned for today in Minsk, where the initial truce was signed in September.

Neither Russia nor Ukraine had confirmed their participation late yesterday.

Ukrainian President Petro Poroshenko said in a statement that it should happen “in the nearest future.”

The leaders of Ukraine, Russia, Germany and France will discuss the conflict at the end of January in the Kazakh capital of Astana, President Nursultan Nazarbayev’s press service said yesterday.

Merkel said Jan. 14 that there’s insufficient agreement between Russia and Ukraine to hold the summit.

“The separatist side and the people they talk to want to show they can still have the upper hand on the battlefield,” Arkady Moshes, head of the EU’s Eastern Neighborhood and Russia research program at the Finnish Institute of International Affairs, said by phone.

“Every time they have the upper hand on the battlefield, the West is more willing to negotiate.”