The Next Battle For Ukraine

January 04, 2015
KIEV, Ukraine -- Can a group of young reformers fix a broken country? That is the question that Dmytro Shymkiv, the first deputy head of Ukraine’s presidential administration, is getting a lot these days. 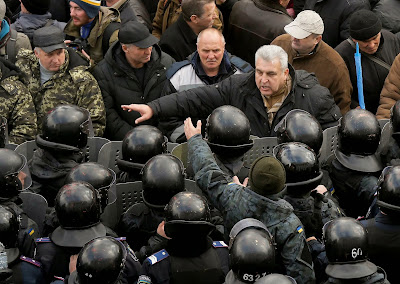 In Kiev, Ukrainians argued with police officers during a rally in front of Parliament.

About a year ago, Mr. Shymkiv was running Microsoft in Ukraine and pondering accepting a promotion to the company’s offices in Latin America.

A mass protest movement toppled Ukraine’s government last February, precipitating some of the most momentous events of Ukraine’s post-Soviet life: a rethinking of its national identity, a war with Russia and the effective loss of control over a slice of eastern territory.

Now Mr. Shymkiv, 39, is helping to steer reform in Ukraine, a task that on some days seems exhilarating, and on others impossible.

But shortly after, a mass defection of the president’s allies quickly led to his downfall.

“If you told me a year ago that I would be in the government, I would have said you are out of your mind,” Mr. Shymkiv said by telephone last month from his office in Kiev.

“I’m working in an international corporation with great career development prospects and I’m going to do what?”

The war in eastern Ukraine, still grinding on despite a September cease-fire, may have captured the world’s attention.

But just as important for the country’s future is what is happening in a handful of offices in Kiev, where a small team of young reformers has recently gotten to work.

They say they want to save their country by transforming it into something it has never been: honest.

It requires a fundamental shift in the way society and the state interact, a rewiring of the assumption — nearly universal in post-Soviet societies — that you may as well grab what you can today, because everything might be taken away tomorrow.

It is a tall order.

No former Soviet republic (with the exception of the Baltic States) has managed to fundamentally remake itself and rid itself of corruption, much less one that is this important (46 million people on the edge of Europe and NATO).

Ukraine itself has failed on many occasions, most recently in 2005, and anyone with a sense of history is asking why this time would be any different.

What is more, Ukraine’s old guard still forms the flesh and bones of the bureaucracy.

“There is this tendency to either see the second coming of Christ or the apocalypse when it comes to change in Ukraine,” said Samuel Charap, senior fellow for Russia and Eurasia at the International Institute for Strategic Studies.

“But the reality up till now is that they have always muddled through.”

But there may now be a moment for change.

Ukraine’s economy is in withdrawal from its long-term addiction to cheap Russian gas.

Russia has gobbled up chunks of its territory, including a quarter of its export muscle.

And with Russia no longer willing to foot the bill, Ukraine is asking the West for money, but the war and economic losses have increased its needs and there are doubts about whether the West will come through in time.

In a strange twist, President Vladimir V. Putin of Russia is both the man who most wants change stopped and the one who has created the best opportunity for it.

The war frightened everyone, including people in Ukraine’s south and east who for decades had been deeply ambivalent about being Ukrainian.

It has also electrified a new generation of activists, who are the moral conscience of the new government, watching what it does from their seats in Parliament and reporting back to the public, like a Greek chorus.

(Recent stunts include throwing rotten tomatoes at a board stapled with politicians’ faces.)

So who are Ukraine’s reformers?

Many have come from business.

Most came of age in the twilight of the Soviet Union.

A number of them ran investment funds.

There is even a Ukrainian-American, Natalie Jaresko, from Chicago, who moved to Ukraine in the early 1990s to work for the American government.

She is now finance minister.

“The type of people coming in are very different from what I’ve seen before in Ukrainian politics,” said Erik Berglof, director of the Institute for Global Affairs at the London School of Economics.

“They are young. Many were trained abroad. Most are well off. They are from business and many have run complex organizations.”

Anders Aslund, a senior fellow at the Peterson Institute for International Economics in Washington, pointed out that only two of the new ministers do not speak English, the opposite of the previous government in which only two ministers did speak English.

For Mr. Shymkiv, even the smallest changes have been difficult.

Only half of the more than 400 employees of the presidential administration had ever used email (a third had never used a computer), and getting them to overcome their strong affection for the fax machine has been hard.

A person of the wired world, Mr. Shymkiv is using a Windows smartphone in an office where giant Soviet telephones sit like bricks on his desk.

One immediate problem is cash.

The country is running on fumes in terms of hard currency reserves, in part a result of a large payment recently to Russia for its gas debt.

Without a substantial cash infusion from the International Monetary Fund, the country is likely to suffer an economic meltdown, with far-reaching consequences for its currency, banking system and its new government’s reputation.

Russia’s wobbly finances do not help — about a quarter of Ukraine’s exports go to Russia.

One big test for the new government will be Igor Kolomoisky, a Ukrainian oligarch whose PrivatBank, one of the largest commercial banks in the country, is at the center of a murky web of financial transactions, symbolizing much of what is wrong with the Ukrainian banking industry.

Taking him on will be complicated:

He is a friend of the new government and the revolution that put it there.

He is governor of the eastern region of Dnepropetrovsk.

He also has his own militia.

The odds are overwhelmingly against the reformers.

Change is hard, war is distracting and history is difficult to overcome.

Another looming question is whether Putin will crank the war back up if Ukraine’s fragile new government actually manages to achieve some success.

Progress would be threatening, as it would suggest that if Ukrainians can have a revolution and succeed, Russians could, too.

“ ‘Don’t bother with all this E.U. nonsense. Just take our billions and be done with it.’ ”

But experts argue that there is a chance — a small chance — that this time could be different.

“There has been a shift in the mentality,” said Alexander J. Motyl, a political-science professor at Rutgers University, Newark.

“People understand that this is a do-or-die situation — that they may simply not exist anymore.”

He added: “Yes, they have always had their backs against the wall. But the wall had been very comfortable. Now it’s wet. And cold. And you can hear the gunfire on the other side.”