January 25, 2015
BRUSSELS, Belgium -- NATO said on Saturday that Russian troops were supporting a rebel offensive in eastern Ukraine with sophisticated missiles, rockets and drones and demanded Moscow halt its support. 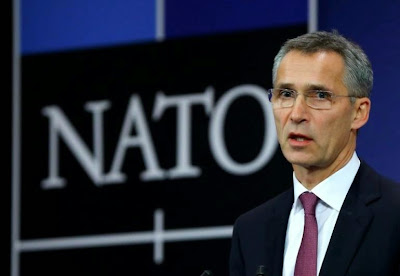 Pro-Russian rebels launched an offensive against the strategic port of Mariupol in eastern Ukraine and officials there said rebel rockets had killed at least 30 people.

NATO Secretary-General Jens Stoltenberg said fighting in eastern Ukraine had sharply escalated, with indications of a large-scale offensive by Russian-backed separatists at multiple locations in the Donetsk and Luhansk districts as well as against Mariupol.

"This is in utter disregard of the ceasefire," he said in a statement.

"I strongly urge Russia to stop its military, political and financial support for the separatists, stop destabilizing Ukraine and respect its international commitments," he said.

Latvia, which currently holds the European Union's presidency, called for EU foreign ministers to hold an extraordinary meeting to discuss the situation.

European Council President Donald Tusk said on Twitter that he had held an urgent phone call with Ukrainian President Petro Poroshenko to discuss what the international community should do in the face of the increasing violence.

"Once again, appeasement encourages the aggressor to greater acts of violence. Time to step up our policy based on cold facts, not illusions," he said on Twitter.

Tusk, a former Polish prime minister who is hawkish toward Russia, did not specify what he was referring to.

But the EU's foreign policy chief Federica Mogherini, seen as dovish toward Russia, suggested in a memo this month that EU governments could start talking to Russia again about global diplomacy, trade and other issues if Moscow implemented the Minsk peace agreement to end the Ukraine conflict.

Mogherini's proposals were met with suspicion by some EU countries that feared they would send the message to Russian President Vladimir Putin that the EU's resolve was weakening.

Mogherini said in a statement on Saturday however that the further escalation of the Ukraine conflict "would inevitably lead to a further grave deterioration of relations between the EU and Russia."

The 28-nation EU has joined the United States in imposing economic sanctions on Russia over its involvement in Ukraine, but the bloc is divided about any further escalation of sanctions.