Russia Lambasts Ukraine Over Move On Rebels At Donetsk Airport

January 19, 2015
KIEV, Ukraine -- The Kremlin has accused Ukraine of rejecting its efforts to broker peace with the country’s separatist rebels, who last night appealed for international help as Kiev’s forces reclaimed territory around Donetsk’s ruined airport. 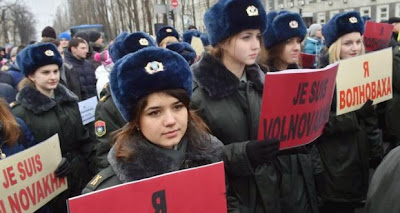 Female Ukrainian army cadets hold placards reading “I am Volnovakha” in French and Ukrainian during a march on Independence Square in Kiev yesterday to pay tribute to the 13 passengers of a bus killed after a shelling by pro-Russian separatists in small eastern Ukrainian ciry of Volnovakha.

The escalation in fighting and losses suffered by the militants are stoking fears that Russian troops may intervene on a larger scale to help the rebels, as Kiev and the West say they have done in the past.

At least four civilians, including two children, were killed by artillery fire over the weekend, and in Kiev and other Ukrainian cities yesterday thousands marched in memory of 13 people killed when a shell struck a bus last week.

The military and the rebels blame each other for civilian deaths in a conflict that has taken more than 4,800 lives and displaced about one million people.

Ukraine’s military said yesterday at lunchtime that four servicemen had been killed and 32 wounded in the previous 24 hours, and claimed to have retaken control of Donetsk airport, which has assumed great symbolic value during months of fierce fighting.

Military spokesman Colonel Andriy Lysenko insisted the airport was considered government-controlled territory in a ceasefire deal agreed in September in Minsk, and so Ukraine’s forces were not breaching its terms by taking the area back.

Russia’s foreign ministry claimed the Minsk pact envisaged the airport being under rebel control, however, and accused Ukraine of launching “a full-scale military operation to recapture this strategic site, so as to continue attacks on residential areas of Donetsk”.

The ministry also accused Kiev of using the so-called ceasefire to reposition forces and of seeking “further escalation of the conflict with the aim of ‘resolving’ it by military means”.

The statement carried some of Moscow’s strongest recent criticism of Kiev, and came alongside a Kremlin claim that Ukrainian president Petro Poroshenko had rejected peace efforts from Russian counterpart Vladimir Putin.

“Unfortunately, the Ukrainian side refused the suggested plan and did not make any counter proposals, and, what’s more, resumed military action,” Peskov said, adding that the Kremlin was “extremely worried by the development of the situation” and the “absolute degradation of the situation in southeast” Ukraine.

Despite the death, wounding and capture of Russian servicemen in Ukraine and ample evidence of rebel use of advanced Russian weaponry, Putin insists Moscow is a peacebroker not a party to the conflict.

The Kremlin leader says he does not want to annexe rebel parts of Donetsk and Luhansk regions from Ukraine, as he did Crimea last March, but he also claims the right to defend Russian-speakers abroad, and has vowed to prevent Kiev’s pro-western leaders “destroying” their critics in eastern provinces.

The so-called foreign minister of Donetsk rebels, Aleksandr Korfman, yesterday appealed “to the whole international community to make every effort to halt unpunished mass murder in the very centre of Europe”.

Inaccurate rockets Ukraine’s military says it is doing everything to avoid striking residential areas and injuring civilians, and accuses the insurgents of placing heavy weaponry in densely populated towns and cities.

Both sides use Soviet-era multiple rocket systems that are notoriously inaccurate.

Kiev blames the rebels for a rocket strike on a bus that killed 13 people at a checkpoint near the town of Volnovakha last week, and at rallies around Ukraine yesterday people carried signs saying “Je Suis Volnovakha” – echoing the “Je Suis Charlie” messages for victims of the attack on French magazine Charlie Hebdo.

Addressing thousands of marchers in Kiev, Mr Poroshenko said Ukraine would not give up “a single patch” of land.

Linking the Volnovakha attack to the suspected rebel missile strike that brought down a Malaysia Airlines jet over eastern Ukraine last July, Mr Poroshenko declared that Ukrainians would never bow to terror and were “united”.