January 16, 2015
WIESBADEN, Germany -- Russia is working to develop within a few years the capability to threaten several neighbors at once on the scale of its present operation in Ukraine, a senior American general said. 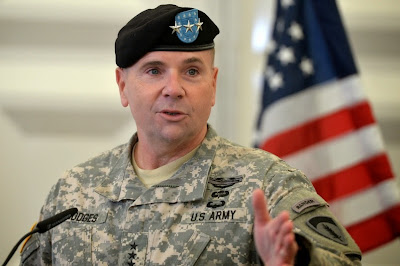 Lieutenant-General Ben Hodges, commander of U.S. Army forces in Europe, told reporters an attack on another neighbor does not seem like an immediate threat because Moscow appears to have its hands full in Ukraine for now.

But that could change within a few years, when upgrades sought by President Vladimir Putin would give Russia the ability to carry out up to three such operations at the same time, without a mobilization that would give the West time to respond.

"Right now, without mobilizing, I don't think they have the capacity to do three major things at one time. They can do one thing, I think, in a big way without mobilizing. But in four to five years, I think that will change," Hodges said.

"Certainly within the next four to five years they will have the ability to conduct operations in eastern Ukraine and pressure the Baltics and pressure Georgia and do other things, without having to do a full mobilization."

The war in Ukraine, in which NATO says Moscow has supported pro-Russian rebels with arms and troops, has alarmed some of Russia's other neighbors, who are seeking greater reassurances for their defense from the Western alliance.

Moscow denies its active troops have fought in eastern Ukraine, but Western governments say they have evidence it has sent armored columns and hundreds of soldiers.

Almost 5,000 people have died in the conflict, including nearly 300 on board a Malaysian airliner shot down over rebel-held territory.

Putin has committed to spending billions to boost Russia's military capability, despite an economic crisis caused by sanctions over Ukraine and falling oil prices.

Russian forces, particularly small elite units, have proven far more effective than in a 2008 war in Georgia, they say.

Moscow has also developed what they describe as "hybrid war" capabilities, in which it organizes, funds and arms local insurgents while deploying its own elite troops in unmarked uniforms - known in Crimea as the "little green men" - so swiftly and covertly that it is difficult to develop a response.

Hodges said neighbors like the Baltic states and Georgia appear to be safe for now, but possibly not for long.

"I think their focus is on Ukraine. I do think some of the other countries that are around the perimeter of Russia are watching that and they are thinking they have got two or three years to get ready before they may become the target."

Hodges led a U.S. army "Russia study day" in Germany this week at which military and civilian experts on Russia briefed commanders from around Europe on Russia's political and military strategy and its view of the West.

Scores of U.S. officers, hair cropped close and dressed for combat, listened intently at a U.S. base near Wiesbaden as analysts portrayed an increasingly assertive Russian leadership deeply suspicious of Western influence and bent on re-arming.

NATO agreed on a series of responses to the perceived new Russian threat at its summit in Wales in September, including stepping up exercises in eastern Europe and setting up a "spearhead" rapid reaction force.

Russian Defence Minister Sergei Shoigu was quoted this week by TASS news agency as saying Moscow would stick to its modernization plans estimated to cost more than 20 trillion rubles ($300 billion) through 2020.

Even so, Moscow's defense budget of about $68 billion in 2013 was only about one-ninth of Washington's, according to the International Institute for Strategic Studies think tank.

A NATO military officer said that in recent years the Russians had modernized their rocket forces, submarines and air force, although they have regularly fallen short of their plans.

In the coming year, Russia is expected to improve its northern, Baltic and Black Sea fleets and continue to modernize some land forces, said the officer on condition of anonymity.

The slide in the oil price and Western sanctions could slow its military modernization, he said.

While many analysts believe Russia would not want to risk a direct confrontation with the United States, NATO strategists are giving thought to the possibility Moscow could stage a Crimea-style operation in a country such as Estonia, with a large ethnic Russian minority.

"They (the Russians) have got the capability to mass quickly and conduct an offensive before we could militarily respond fast enough at the same scale," the NATO military officer said.

Noting that it had taken weeks to convince some European countries that gunmen operating in Crimea were Russian soldiers, Rosin said Estonia could face a similar problem winning support under NATO's mutual defense clause if it were attacked.

"My problem would be to produce the necessary evidence."

Unknown said…
The West must be very careful neither to over-estimate Russian strength nor to become complaisant. Whenever confronted by determined opponents, Russia lost. They lost to the Japanese in the early part of the 20th century. Then to the German/Austrian forces in World War I. Then to the Finns in 1939. Then - almost certainly - would have lost to the Germans if the Germans had not taken on much of the rest of the world at the same time, and if not for American land-lease. Then it took them two wars to subdue tiny Chechnya. They did not cover themselves with glory even against 5 million Georgians.

In short, Russian military prowess, leadership, logistical capabilities have always been inflated to gain whatever advantage they could through bluff and intimidation. There is a great deal of rot under that seeming colossus. Like bullies anywhere, Russians generally go after pint-sized opponents and often can't even succeed against them. The simple best description is that - in their stance against the outside world - they are predatory bottom feeders......a very, very far cry from the deranged Alexander Dugin's description of them as the "supreme society". It is only a matter of time before they lose Siberia to the Chinese.

But complacency would be one of the worst reactions to over-exaggeration. In as much as they are always looking for weakness and for weaker opponents, they are much more likely to confront a country that has failed to keep up its guard and military strength than one that has. They may be delusional and they may be posers but they are not stupid. So NATO countries would be well advised to brush the cobwebs off their tanks; get their troops in shape; put some earplugs into their ears so as not to have to listen to Lavrov's dire warnings that "Russia will respond in kind" (they would if they could) and face Russia.............. calmly.
10:44 AM