January 15, 2015
PARIS, France -- Russian Foreign Minister Sergei Lavrov on Monday accused Western leaders of excluding the Kremlin from diplomatic brainstorming on how to fight global terrorism as punishment for its role in the Ukraine crisis. 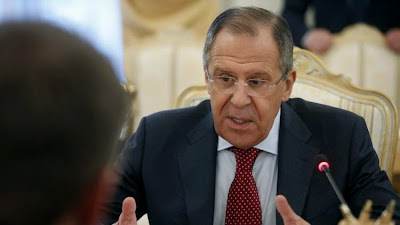 Lavrov was in Paris for weekend memorials following last week's terrorist attacks in the French capital but was apparently left out of meetings that took place on the sidelines of the solemn marches with the leaders of France, Germany and Ukraine.

German Foreign Minister Frank-Walter Steinmeier was meeting with Lavrov, Ukrainian Foreign Minister Pavlo Klimkin and France's top diplomat, Laurent Fabius, at a Berlin strategy session late Monday aimed at breaking the impasse in eastern Ukraine where a Sept. 5 cease-fire has all but collapsed.

But Merkel and Hollande have since demanded that Ukrainian troops and pro-Russia separatists fighting in eastern Ukraine adhere to the battered cease-fire and implement the other conditions of that accord reached in the Belarus capital of Minsk four months ago.

Those include identifying the front lines between the Moscow-backed separatists and Ukrainian government forces and a complete cessation of artillery and gunfire.

In comments carried by Russia's Tass news agency, Lavrov accused the West of excluding Russia from the concerted fight against terrorism and warned that the Islamic extremists suffer no such political divide.

"There is a growing understanding that this common threat must not be allowed to broaden and deepen."

But cooperation between the West and Russia on counterterrorism "has been suspended," Lavrov said, adding that the breach wasn't Moscow's initiative.

"Meanwhile, terrorists do not suspend cooperation with each other. Terrorist activity knows no bounds."

Lavrov called the Western stance "childish" and criticized the linking of Russia's Ukraine policy and its involvement in mutual counterterrorism discussions as "based on some personal favors, insults or the desire to prove who calls the shots."

The Russian diplomat also warned Ukraine on Monday against trying to militarily defeat the separatists who occupy two key industrial regions of eastern Ukraine, where artillery exchanges have escalated in recent days after a relative lull during the holidays.

Steinmeier, at the start of the Berlin gathering Monday night, seemed to concede there were limited prospects for making enough progress on the Sept. 5 peace plan to justify a meeting of the four countries' leaders on Thursday.

But "we must try again to find a political solution," he told reporters as he sat down with his counterparts.

Fighting over territory in eastern Ukraine broke out after Russia annexed Ukraine's Crimea territory on March 18, setting off a chorus of international protest over the violation of postwar treaties recognizing national boundaries.

Almost 5,000 have died in the conflict that Ukraine and its Western allies blame Russia for instigating and aiding with arms and fighters.

Russia has denied that it is involved in what it terms a civil war.

In a related development, Interpol on Monday added former Ukrainian President Viktor Yanukovich to its wanted list, acting on a 10-month-old request from the Ukrainian political leaders who helped oust him on Feb. 21.

The international police agency said Yanukovich, who fled to Russia after the pro-Europe rebellion that deposed him, was wanted for "misappropriation, embezzlement or conversion of property by malversation."

There was no immediate response by either the Kremlin or the Ukrainian government that was elected to succeed Yanukovich and his pro-Moscow parliamentary and government leaders.

Russia's Interfax news agency, however, quoted an unidentified official source as saying that Russia "is likely to decline any request to extradite" Yanukovich, in whom Putin found a pliable ally to retain Moscow's influence in the now-independent former Soviet republic.

Unknown said…
Lavrov has it wrong. Rejecting Russia is not "childish"......it is simply a recognition that one does not invite one of the world's biggest supporters of terrorism to a conference dedicated to fighting terrorism.

Much of Russia's history is a history of terrorizing, brutalizing, exploiting, and oppressing innocent civilians - both its own and others.

It's very much like inviting a skunk to a garden party.
2:39 PM